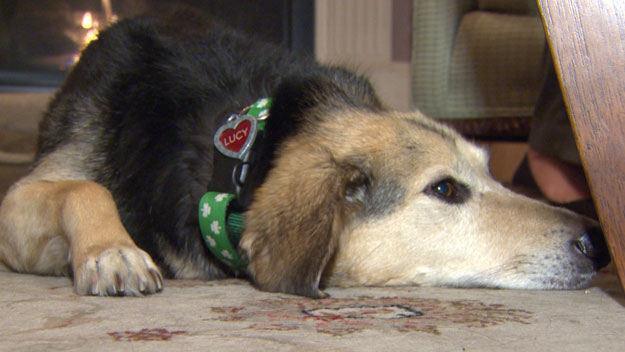 BOSTON -- A dog helped save her owner who was badly injured in a car crash just days before Thanksgiving, reports CBS Boston.

John Miles was walking his dog Lucy in Dorchester, Mass., as he does every day, when both of them were hit by a car.

Miles blacked out and doesn’t remember what happened. Lucy, a husky-beagle mix, who was also injured, limped to a nearby dentist’s office and barked until help arrived. She limped back and stayed by John’s side until emergency crews arrived.

“I’m very happy that Lucy did what she did,” Miles said. “Makes me feel wonderful because if a dog as good as her can get recognition for doing something above and beyond good for her.”

Miles had no identification on him, so first responders used Lucy’s ID tags to determine who they were.

“What I’m being told is she sat there and was crying and everything else, you know because I couldn’t get up,” Miles says. “That’s the type of dog she is.”

Miles suffered major injuries including two broken legs, a broken arm and 15 facial fractures. He will undergo surgery on Thursday. Lucy is currently limping around with a torn ACL and leg fractures. Right now, she is clearly missing her owner.

“We found out that beagles actually cry, they have tear ducts,” said Caitlan Miles, John’s daughter. “So after the accident, when I was home with her, she had tears running down her fur. She is walking around lost without him.”

Lucy will have surgery on Friday. A fund has been set up to help pay for the cost of her care.

“Once the winter’s over, if I’m recovered and Lucy’s recovered you can bet we’ll be out doing our walking again,” John said.

Boston Police told CBS affiliate station WBZ-TV the driver stopped after the accident and will not be charged.