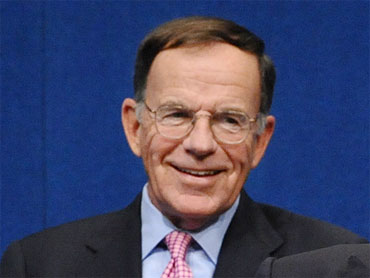 A person briefed on the appointment told CBS News Political Director Steve Chaggaris that Patrick, a Democrat, will announce Kirk as his choice at 11 a.m. ET.

Kirk was a close friend of Ted Kennedy and was reportedly strongly pushed by the family to be picked. His supporters included both of Kennedy's sons, Patrick and Edward, as well as his widow, Victoria Reggie Kennedy.

Yesterday, the Massachusetts legislature passed a bill which allows for Patrick to make the appointment. Kirk will serve until January 19th, when a new election will be held to determine who will serve out the remaining three years of Kennedy's term.

Kirk, 71, lives on Cape Cod and chairs the Board of Directors of the John F. Kennedy Library Foundation. An attorney and sometime lobbyist, it is believed he would vote in much the same way that Ted Kennedy did as senator.

"He is intimately knowledgeable and supportive of the work that Sen. Kennedy was doing," a Democratic aide told the Associated Press. "He can start right away on that work. It's an opportunity in a short period of time to try to complete some of the work Sen. Kennedy has been working his whole life on."

Massachusetts Republicans have complained that Democrats were hypocritical in passing a bill allowing Patrick to make the appointment. They noted that state Democrats defeated GOP efforts to pass a similar bill in 2004 and 2006 when a Republican governor, Mitt Romney, was in office.

Former Massachusetts Governor and Democratic presidential nominee Michael Dukakis was among the other names that were mentioned as possible appointees.