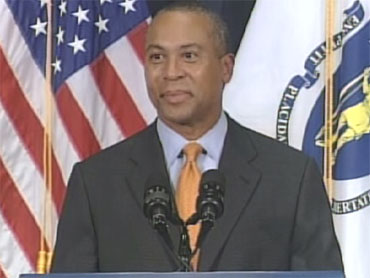 For Massachusetts Gov. Deval Patrick, picking a temporary replacement for the late Sen. Edward M. Kennedy isn't just about finding the best person to represent the state in Washington.

It's about helping his national party as Democrats try to solidify their 60-vote, filibuster-proof majority to pass the top legislative priority of the White House, a national health care overhaul.

It's about helping his good friend, President Barack Obama, a fellow Chicagoan and Harvard Law graduate who invited Patrick and his wife back to the White House for late-night dessert on Inauguration Day.

And it's about avoiding any political trouble, a special concern for a governor heading into a re-election year with low poll ratings and a group of campaign opponents ready to pounce on any miscue.

All that explains why the first-term governor has been regularly consulting not only with the White House about his pick, but also with a campaign team that has a myriad of Obama connections. Statehouse aides usually involved in major administrative decisions say they have been cut out of the discussion, and Patrick has personally culled the list of names and overseen their vetting.

Among the possibilities: former Gov. Michael Dukakis, the party's 1988 presidential nominee, and Paul Kirk, a Kennedy friend and chairman of the John F. Kennedy Library Foundation.

An announcement could come as soon as Thursday. The House voted last week to approve a change in state law so the governor can temporarily fill a Senate vacancy while a five-month special election campaign is held. The Senate followed suit on Tuesday. Both chambers are expected to give the bill final approval on Wednesday, and Patrick has said he wants to move quickly to fill the vacancy.

The special election to replace Kennedy permanently is set for Jan. 19. The senator died Aug. 25 of brain cancer.

"This is an opportunity for him to use the bully pulpit of the governor's office as he begins the campaign for re-election," Warren Tolman, a former state senator and Democratic political observer, said of Patrick. "This is an important thing for the policy that will be discussed in Washington, but it's also important for him symbolically."

Patrick, 53, breezed into office in November 2006 after a campaign laden with talk of hope and change and eliminating politics as usual. Obama adopted the same thematics two years later in his winning presidential campaign, no surprise given they shared political consultants: David Axelrod and David Plouffe.

Axelrod now works for Obama in the White House; Plouffe has signed onto Patrick's re-election campaign.

Patrick has been largely out of sight the past month, recovering from hip replacement surgery. By his own admission, he has spent a good deal of that time fielding calls from the White House, Senate Majority Leader Harry Reid and others about the temporary replacement.

Obama weighed in personally as they spoke the morning of Kennedy's funeral in Boston, and Axelrod has courted legislative leaders despite administration declarations that the succession bill is a local matter. Patrick's former chief of staff and current campaign manager, Doug Rubin, is handling the logistics.

"Massachusetts needs two voices in the U.S. Senate at any time, but particularly now, with the gravity of the issues," Patrick said Aug. 31 as he announced the special election dates.

The risks of an appointment have been evident during the past year: Illinois Gov. Rod Blagojevich ended up indicted and thrown out of office over his handling of Obama's Senate replacement, while Florida Gov. Charlie Crist was accused of favoritism after tapping his former campaign manager to replace former Sen. Mel Martinez.

The temporary nature of the Massachusetts appointment insulates both Obama and Patrick from any similar fallout, according to Paul Watanabe, a political science professor at the University of Massachusetts-Boston.

"Everybody understands what the parameters are for this person: not competing in the special election, and being someone who is down there to hold the seat for five months and cast predictable votes," Watanabe said. "The task the person is going to perform is not a long one, and it's a pretty clear one."