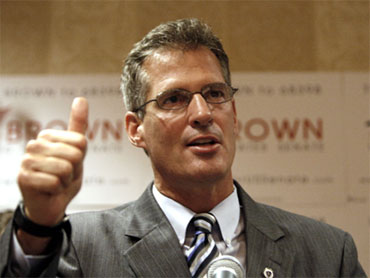 (AP Photo/Winslow Townson)
The most prominent Republican yet to enter the race for the late Ted Kennedy's Senate seat is considered a rising star among the Massachusetts GOP establishment.

However, it turns out the magazine Cosmopolitan pegged State Senator Scott Brown as a hot commodity decades ago, when they named Brown "America's Sexiest Man" and featured a nude centerfold picture of him in 1982. (Check out the nude picture here.)

Back then, Brown was a 22-year-old law student at Boston College who reportedly described himself to the magazine as "a bit of a patriot."

Now 50 years old, Brown announced his candidacy for the Senate seat earlier this month, "casting himself as a fiscal conservative and Washington outsider," the Boston Globe reported. He claims to have never voted for a tax increase in his 11 years in the state legislature, the newspaper reports, and is also known for his advocacy for veterans and victims of sexual abuse.

"We bet he still has an amazing body underneath his suit and tie," Cosmo comments.

As Politico points out, this is one potentially embarrassing photograph that can't be blamed on Facebook.

Fans of pop culture may not only remember Brown's salacious photograph, but his daughter's brush with fame as well -- his daughter Ayla Brown is a Boston College basketball player and was a contestant on the television show "American Idol," the Globe reports.