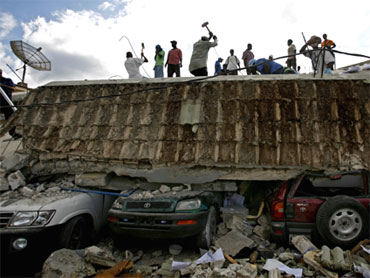 Haitians piled bodies along the devastated streets of their capital Wednesday after a powerful earthquake flattened the president's palace, the cathedral, hospitals, schools, the main prison and whole neighborhoods. Officials feared thousands - perhaps more than 100,000 - may have perished but there was no firm count.

Death was everywhere in Port-au-Prince. Bodies of tiny children were piled next to schools. Corpses of women lay on the street with stunned expressions frozen on their faces as flies began to gather. Bodies of men were covered with plastic tarps or cotton sheets.

President Rene Preval said he believes thousands were killed in Tuesday afternoon's magnitude-7.0 quake, and the scope of the destruction prompted other officials to give even higher estimates. Leading Sen. Youri Latortue told The Associated Press that 500,000 could be dead, although he acknowledged that nobody really knows.

All three hospitals operated by Doctors Without Borders have collapsed or had to be abandoned, reports CBS Evening News anchor Katie Couric from Haiti. Many of its doctors are missing.

The head of the U.N. peacekeeping mission was missing and the Roman Catholic archbishop of Port-au-Prince was dead.

"The cathedral, the archbishop's office, all the big churches, the seminaries have been reduced to rubble," Archbishop Bernardito Auza, the apostolic envoy to Haiti, told the Vatican news agency FIDES.

The parking lot of the Hotel Villa Creole was a triage center. People sat with injuries and growing infections by the side of rubble-strewn roads, hoping that doctors and aid would come.

The international Red Cross said a third of Haiti's 9 million people may need emergency aid and that it would take a day or two for a clear picture of the damage to emerge.

At first light Wednesday, a U.S. Coast Guard helicopter evacuated four critically injured U.S. Embassy staff to the hospital on the U.S. Naval base at Guantanamo Bay, Cuba, where the military has been detaining suspected terrorists.

President Barack Obama promised an all-out rescue and humanitarian effort, adding that the U.S. commitment to its hemispheric neighbor will be unwavering.

"We have to be there for them in their hour of need," Obama said.

A small contingent of U.S. ground troops could be on their way soon, although it was unclear whether they would be used for security operations or humanitarian efforts. Gen. Douglas Fraser, commander of the U.S. Southern Command, said roughly 2,000 Marines as part of an expeditionary unit might be deployed aboard a large-deck amphibious ship. Fraser said the ship could provide medical help.

Other nations - from Iceland to Venezuela - said they would start sending in aid workers and rescue teams. Cuba said its existing field hospitals in Haiti had already treated hundreds of victims. The United Nations said Port-au-Prince's main airport was "fully operational" and open to relief flights.

The U.S. Navy aircraft carrier, USS Carl Vinson, is under way and expected to arrive off the coast of Haiti Thursday. Additional U.S. Navy ships are under way to Haiti, a statement from the U.S. Southern Command said.

U.N. humanitarian chief John Holmes said it was possible that the death toll "will be in the thousands."

People pulled bodies from collapsed homes, covering them with sheets by the side of the road. Passers-by lifted the sheets to see if loved ones were underneath. Outside a crumbled building, the bodies of five children and three adults lay in a pile.

The prominent died along with the poor: the body of Archbishop Joseph Serge Miot, 63, was found in the ruins of his office, said the Rev. Pierre Le Beller of the Saint Jacques Missionary Center in Landivisiau, France. He told The Associated Press by telephone that fellow missionaries in Haiti had told him they found Miot's body.

Haiti's Senate president was among those trapped alive inside the Parliament building. Much of the National Palace pancaked on itself.

The international Red Cross and other aid groups announced plans for major relief operations in the Western Hemisphere's poorest country.

Tens of thousands of people lost their homes as buildings that were flimsy and dangerous even under normal conditions collapsed. Nobody offered an estimate of the dead, but the numbers were clearly enormous.

American Red Cross spokesman Eric Porterfield said that the agency has already exhausted the small amount of medical equipment and medical supplies it had in Haiti and is sending more supplies, though it was not clear when they would arrive.

Medical experts say disasters such as an earthquake generally do not lead to new outbreaks of infectious diseases, but they do tend to worsen existing health problems.

Haiti's quake refugees likely will face an increased risk of dengue fever, malaria and measles - problems that plagued the impoverished country before, said Kimberley Shoaf, associate director of the UCLA Center for Public Health and Disasters.

With hospitals and clinics severely damaged, Haiti will also face risks of secondary infections. People seeking medical attention for broken bones and other injuries may not be able to get the help they need and may develop complications.

Dead bodies piled on the streets typically don't pose a public health risk. But for a country wracked by violence, seeing the dead will exact a psychological toll.

An American aid worker was trapped for about 10 hours under the rubble of her mission house before she was rescued by her husband, who told CBS' "Early Show" that he drove 100 miles to Port-au-Prince to find her. Frank Thorp said he dug for more than an hour to free his wife, Jillian, and a co-worker, from under about a foot of concrete.

An estimated 40,000-45,000 Americans live in Haiti, and the U.S. Embassy had no confirmed reports of deaths among its citizens. All but one American employed by the embassy have been accounted for, State Department officials said.

There are two C-130s standing by at the airport in Port-au-Prince, ready to take out a sizable number of Americans - perhaps 100-125, reports CBS News State Department reporter Charles Wolfson.

Even relatively wealthy neighborhoods were devastated.

An AP videographer saw a wrecked hospital where people screamed for help in Petionville, a hillside district that is home to many diplomats and wealthy Haitians as well as the poor.

At a destroyed four-story apartment building, a girl of about 16 stood atop a car, trying to see inside while several men pulled at a foot sticking from rubble. She said her family was inside.

"A school near here collapsed totally," Petionville resident Ken Michel said after surveying the damage. "We don't know if there were any children inside." He said many seemingly sturdy homes nearby were split apart.

The U.N.'s 9,000 peacekeepers in Haiti, many of whom are from Brazil, were distracted from aid efforts by their own tragedy: Many spent the night hunting for survivors in the ruins of their headquarters.

U.N. peacekeeping chief Alain Le Roy said that at least 14 U.N. personnel were killed and 150 were still unaccounted for, including mission chief Hedi Annabi. Fifty-six others were injured, and seven of them were medically evacuated from the country.

Le Roy said the fatalities include 13 peacekeepers - 10 Brazilians and three Jordanians - and a Haitian civilian working for the U.N. peacekeeping mission in the country.

U.N. peacekeeping forces in Port-au-Prince are securing the airport, the port, main buildings and patrolling the streets, Le Roy said.

The quake struck at 4:53 p.m., and was centered 10 miles west of Port-au-Prince at a depth of only 5 miles, the U.S. Geological Survey said. USGS geophysicist Kristin Marano called it the strongest earthquake since 1770 in what is now Haiti.

Video obtained by the AP showed a huge dust cloud rising over Port-au-Prince shortly after the quake as buildings collapsed.

Most Haitians are desperately poor, and after years of political instability the country has no real construction standards. In November 2008, following the collapse of a school in Petionville, the mayor of Port-au-Prince estimated about 60 percent of buildings were shoddily built and unsafe normally.

The quake was felt in the Dominican Republic, which shares the island of Hispaniola with Haiti, and in eastern Cuba, but no major damage was reported in either place.

With electricity out in many places and phone service erratic, it was nearly impossible for Haitian or foreign officials to get full details of the devastation.

"Everybody is just totally, totally freaked out and shaken," said Henry Bahn, a U.S. Department of Agriculture official in Port-au-Prince. "The sky is just gray with dust."

Edwidge Danticat, an award-winning Haitian-American author was unable to contact relatives in Haiti. She sat with family and friends at her home in Miami, looking for news on the Internet and watching TV news reports.

"You want to go there, but you just have to wait," she said. "Life is already so fragile in Haiti, and to have this on such a massive scale, it's unimaginable how the country will be able to recover from this."