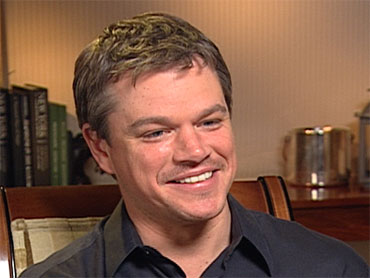 Matt Damon is one of Hollywood's busiest leading men. With his new war thriller called "Green Zone" coming out, he hit the publicity trail with a new look and "Early Show" co-anchor Harry Smith tried to get to the bottom of it.

"What's with the mustache?" Smith asked.

But in "Green Zone," Damon is far from the American West. He's in Iraq. Loosely based on a book by a Washington Post correspondent. The characters are fictional. Damon plays a soldier leading a mobile exploitation team.

"The guy I play is based on a real guy," he said. "We had these teams follow the Army, and right on their heels and start exploiting these sites where we thought the WMD were. And so I play a guy who, you know, is hitting these sites, you know as fast as he can. And they start realizing that there aren't any weapons there."

"OK," Damon said with a laugh, "I like those movies. … Because what we're trying to do is make a big action thriller -- like the Bourne movies -- but set it in the real world."

Smith said, "Some of your last several movies, it seems like the movies have to make a point. Is there a point where (you say), 'Well, if I'm going to do X or Y or Z, then A, B, and C have got to be movies that make a point.' Is there a part of that in the decision making process?"

Damon said he doesn't have a plan like that. "I really go kind of movie-to-movie. There's not a big strategy. I think that's what's helped me the most. I think, if I planned it out, wouldn't work very well."

Damon also commented on going back into business with fellow star Ben Affleck.

"The great thing about working with Ben is, you know, he's directing now. And, you know, we both, obviously, write and act. And so I'd like to start directing too. So there are a lot of different ways that it can work. And, hopefully, will work."

When asked about doing a movie with Affleck about wife-swapping Yankees, Damon said he hasn't seen a script for the film yet.

With his career rolling along, Damon said if he can keep working with directors he's also teamed up with, such as Clint Eastwood, Paul Greengrass and Gus Van Sant, he'll be "very, very happy."

But what about a fourth Bourne movie?

Damon said he hopes for the franchise to continue with him, but "down the line."

One of Damon's upcoming roles will be playing Liberace's young lover, with Michael Douglas as Liberace.

Damon said the last time he saw Douglas, he was told by the star, "'Get your Chapstick ready.'"