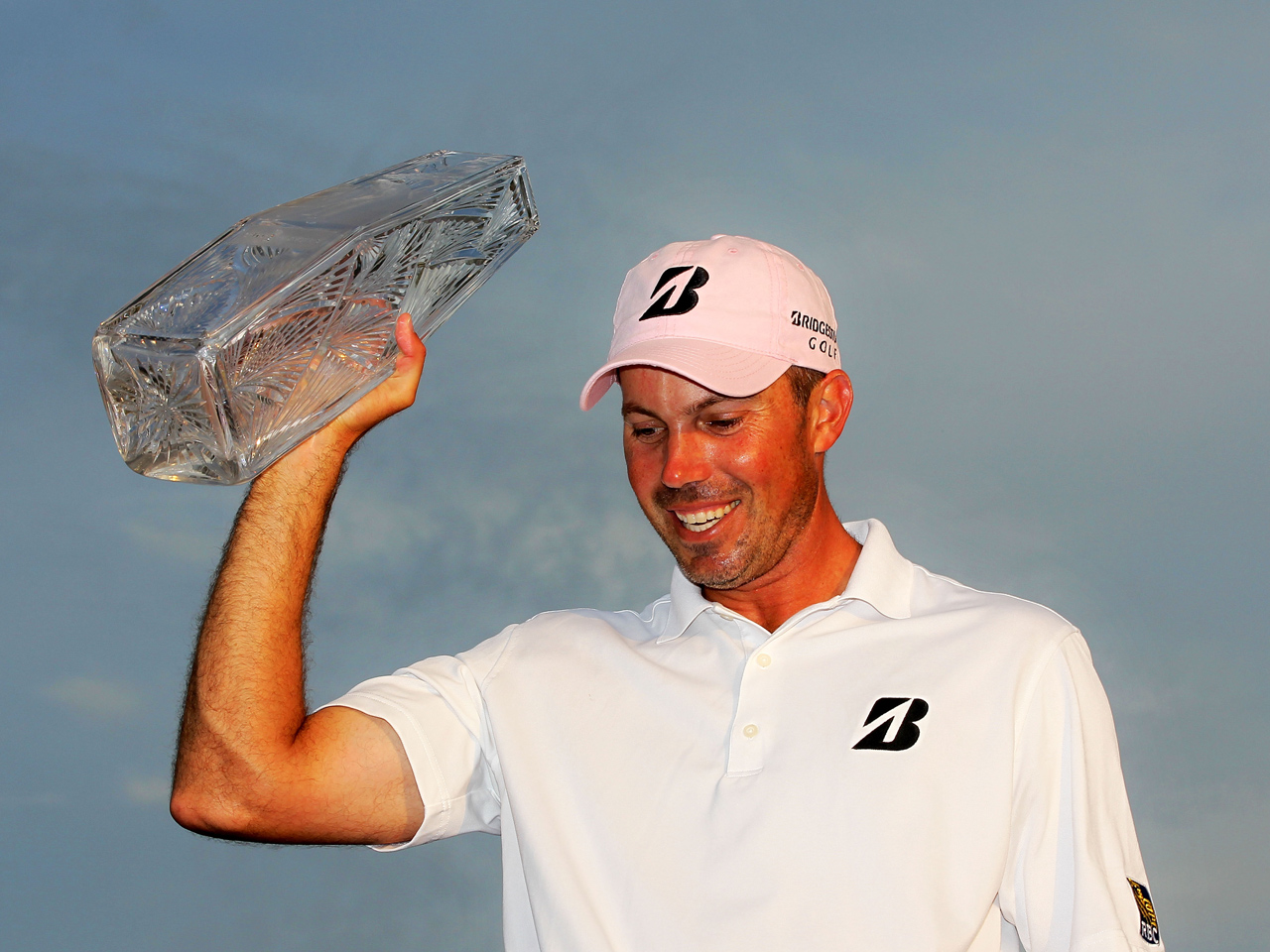 (AP) PONTE VEDRA BEACH, Fla. - Matt Kuchar looked beyond the edge of the 16th green at a scene packed with enough stress it could wipe away even his smile.

Across the water was an island green that was awaiting him Sunday in The Players Championship. The guy dressed all in orange and pumping his first was Rickie Fowler after making a 20-foot birdie putt on the par-3 17th to cut Kuchar's lead to two shots.

Kuchar stepped over his 15-footer and answered with a birdie just as big.

"Yeah, absolutely I saw the putt," Kuchar said. "Watched the thing disappear and he gave a big fist pump. I knew it got him to within two shots and he could birdie 18 to bring it within one. That could have changed the whole scenario of how I would have approached and played 18. So I was really excited to drop that birdie on 16. That was big."

Everything was big for Kuchar on the TPC Sawgrass — most of all, that smile.

After a three-putt bogey he could afford on the 17th, and a tap-in par on the final hole with his family watching, Kuchar closed with a 2-under 70 for a two-shot victory, his fourth career win and by far the biggest in so many ways.

It was his first win in 38 starts on the PGA Tour, dating to The Barclays in 2010. He won $1.71 million, the richest prize in golf, and moved to No. 3 in the Ryder Cup standings and a career-high No. 5 in the world ranking. His parents moved to Ponte Vedra Beach, so he stayed with them all week and delivered the perfect gift on Mother's Day to the woman who taught him to have fun while playing golf.

Even at scary Sawgrass, that was never a problem.

Not so for Kevin Na.

Already struggling with a pre-shot routine of practice swings, waggles and a few intentional whiffs so he could start over, Na heard it from the fans who heckled him with chants of "Pull the trigger!" and "Hit it!" He lost the lead for good with four bogeys in a five-hole stretch to finish the front nine, and when he hit his tee shot in the water on the par-3 13th, fans serenaded him with, "Na-na-na-na ... good-bye."

He closed with a 76, keeping a peculiar record intact — since The Players moved from March to May in 2007, the 54-hole leader has not shot better than 74 in the final round, with an average score of 76.3.

"I backed off and they're booing me," Na said. "I said, `Look, guys, I backed off because of you guys.' ... But it is what it is. I also felt that a lot of people were turning towards me and pulling for me, which I really appreciate."

Laird made the strongest run on a cloudy, breezy afternoon, tying for the lead with his third straight birdie on No. 12. Laird lost his momentum with a poor tee shot on the 14th that led to bogey, and with a bogey on the final hole, he needed big mistakes from Kuchar that never came.

Luke Donald finished alone in sixth after a 66, not quite enough to replace Rory McIlroy at No. 1 in the world.

Tiger Woods shot 40 on his front nine and rallied for a 73, at least finishing The Players Championship under par. That was the smallest of consolations. Far more alarming was that he tied for 40th, the first time in his career that he has finished no better than 40th in three straight tournaments. The streak began after a five-shot win at Bay Hill for his first PGA Tour title in 30 months.

"Just keep working. Keep working," Woods said when asked what he could take out of the week.

Kuchar opened with a tee shot into the woods and a bogey, though that was his only significant mistake until he could afford one with the three-putt at the 17th. The key shots turned out to be pars in the middle of the back nine.

With a one-shot lead and on the upper shelf of the green on the 13th, he two-putted from 60 feet to stay in the lead. His next tee shot went into the bunker, just over the water, on the 14th. He blasted that out from 181 yards, just over the bunker and safely onto the green to secure another par.

"Just doesn't seem like anything is going to upset him too much," Laird said. "That's obviously a good attitude to have when you're out here on Sunday on this golf course."

That smile has been around for a long time.

It first showed up in 1998 when Kuchar won over the crowds with his easy smile and demeanor while contending as an amateur at the Masters and U.S. Open. Through wins and having to go back to the Nationwide Tour, it never seems to leave him.

"It's completely a natural reaction," Kuchar said. "I love playing the game of golf. I have fun doing it. I'm a golf junkie. I have to force myself to take vacations where I cannot play golf, because the game is just always so challenging. And I think it's that challenge that's addictive to me. ... The smile is there because I'm having a good time.

"Now, granted, if I'm shooting 10-over par, you're probably not going to see my real happy. I'm hopefully going to behave myself appropriately, thanks to my mother, but I'm not going to be near as happy as when I'm making birdies."

Suffice to say Kuchar, who finished on 13-under 275, was thrilled Sunday.

"It's such an amazing feeling — playing amongst the game's best, to come out on top, to do it on Mother's Day ... it really is magical," he said.

Curtis, who started the season without a full PGA Tour card, now has three top 5s in the last month, including a win at the Texas Open. He was slowed by a double bogey on the par-3 eighth, and simply couldn't catch up.

Even though Laird is the only player who actually tied for the lead at one point, Fowler generated the biggest buzz in his all-orange attire and free swinging ways. Coming off his first PGA Tour win last week at Quail Hollow, he got in the mix with two birdies in the opening four holes, only to take a double bogey on No. 5 and a bogey on the seventh. Even so, he ran off four birdies after that and never went away until missing the short birdie at the end.

"The last few holes were a lot of fun," Fowler said. "It's a rush out there. Get yourself in contention Sunday at The Players, it's a lot of fun."