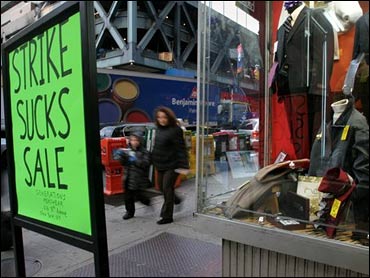 Comptroller William Thompson and other officials had estimated the city economy would lose $400 million a day during a transit strike.

Transit workers walked off the job Tuesday, shutting down buses and subways for millions of riders. Service resumed Friday after the Transport Workers Union agreed to return to work without a contract.

The mayor said he hoped "we never have a replay" of the strike.

"This morning, thousands of hardworking New Yorkers dearly miss the wages and tips they lost during what would normally have been a busy pre-Christmas week," he said.

Bloomberg said that restaurants, museums and cultural institutions were especially hard hit and several construction sites shut down because deliveries couldn't be made through traffic-clogged streets.

The city spent $10 million a day on police overtime and strike-related costs and lost tens of millions of dollars in sales tax revenue, the mayor said.

The day the strike ended, however, several economists said the city's cost estimate of $400 million a day appeared too high. Goldman Sachs economists Ed McKelvey and Sarah Aronchick said it failed to account for offsets: Some workers unable to get to work likely worked from home via computer; many people who would have shopped in the city may have turned to suburban locations; and the strike generated new kinds of economic activity, as employers rented shuttle buses and hotel rooms for workers.

Negotiations between the Metropolitan Transportation Authority and the TWU have continued under a media blackout since the strike ended, although negotiators were believed to be taking Christmas off. A mediator from the state Public Employment Relations Board has indicated the MTA may be willing to withdraw a demand for less generous pensions for its newer employees if the union can agree to contribute more to its health plan.