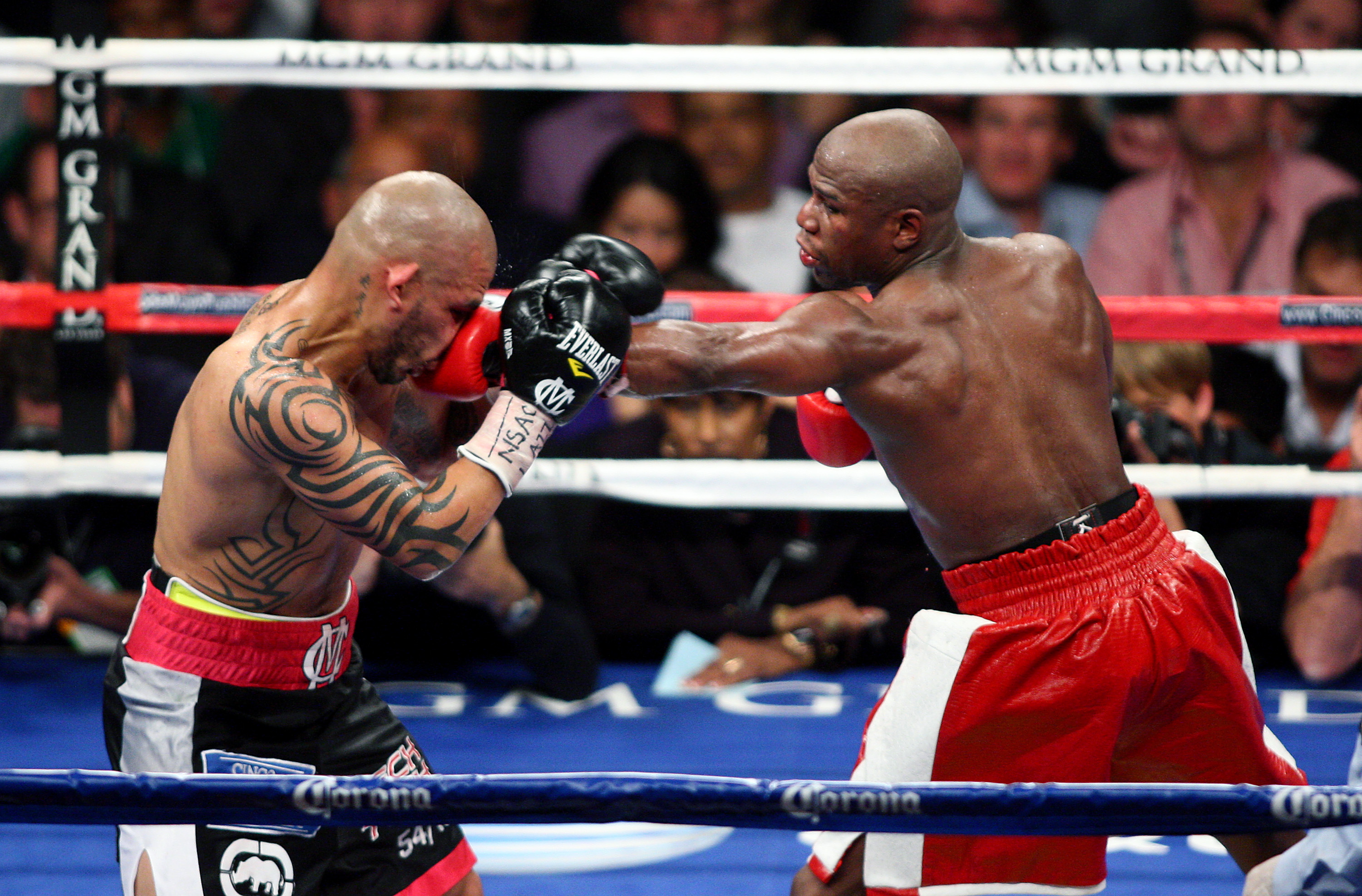 (AP) LAS VEGAS - Floyd Mayweather Jr. finally found himself in a real fight, complete with a bloody nose and an opponent in Miguel Cotto who was never going to quit.

As usual, he found a way to win.

Mayweather used his speed and accuracy Saturday night to take a unanimous decision over a game Cotto in a bruising bout to win a piece of the 154-pound title. But it wasn't easy, as Cotto landed some hard punches and kept attacking all the way to the final bell.

"You're a hell of a champion,'' Mayweather told Cotto in the ring afterward. "You're the toughest guy I ever fought.''

Mayweather dominated late, rocking Cotto in the 12th round to pull out a win and remain unbeaten in 43 fights. Unlike most of his fights, though, Mayweather got his nose bloodied and engaged in some bruising exchanges he usually likes to avoid.

Fighting just a few weeks before he enters a county jail to serve a three-month sentence for domestic abuse, Mayweather found himself in a tough fight against a game opponent who never stopped moving forward. But he was faster and more accurate than Cotto and seemed to wear him down in the final rounds.

In the last round, Mayweather landed his best punch of the night, a left uppercut that seemed to hurt Cotto. He followed that with several flurries to the head to wrap up a decision that until the later rounds had been in doubt.

The decision was roundly booed by the crowd at the MGM Grand arena, which cheered wildly every time Cotto landed a punch.

"He's a tough competitor,'' Mayweather said. "He came to fight, he didn't just come to survive. I dug down and fought him back.''

Cotto was never down, though he seemed hurt several times during the fight, particularly in the 12th round.

"The judges said I lost the fight, I can't do anything else,'' Cotto said. "I'm happy with my fight and performance and so is my family. I can't ask for anything else.''

Mayweather, who was guaranteed $32 million, was forced to fight every minute of all 12 rounds against the Puerto Rican champion. He did it after weighing in at 151 pounds, the heaviest he has ever been for a fight.

The weight didn't seem to affect Mayweather, and neither did the heavier 10-ounce gloves at super welterweight. But he took some punishment, including a bloody nose during the middle rounds, before coming back to dish some out in the later rounds.

"When you fight on pay-per-view you have to give the fans what they want, and that's excitement,'' Mayweather said.

"Mayweather entered the ring unbeaten in his 16-year pro career, and a 6-1 favorite to stay that way. The fighter who has become the biggest pay-per-view attraction in the sport padded his already thick wallet with the fight, but he was forced to earn every penny of it.

"The win gave Mayweather the 154-pound title held by Cotto, and assured him of still being a champion when he reports to jail June 1 for a sentence stemming from a domestic abuse case involving his former girlfriend and their children.

"In life there's obstacles,'' Mayweather said. "When it comes to June 1, I have to accept it like a man.''

Mayweather will be in jail when Manny Pacquiao fights in the same ring June 9 at the MGM Grand against Timothy Bradley. Though boxing fans have clamored for a Mayweather-Pacquiao fight, it has yet to be made and may never be made.

That's partly because of Mayweather's insistence that Pacquiao submit to Olympic-style drug testing, though Pacquiao has already said he will do that.

"I want to fight Pacquiao but he needs to take the tests before we make that fight,'' Mayweather said.

Cotto came out looking slow and overmatched in the first round, but quickly settled into a routine, attacking Mayweather from behind his left jab. But Mayweather got more aggressive coming out to start the fourth round, and landed a series of rights to the head that stunned Cotto and kept him from moving forward effectively.

Mayweather fought good portions of the fight on the ropes, using them for leverage and counterpunching to Cotto's head when he opened up. He was not only quicker than Cotto, but more accurate, often landing in between Cotto's defenses.

"He's ready to quit,'' trainer Roger Mayweather told his nephew after the sixth round.

But Cotto was relentless, coming forward and hitting Mayweather with good shots to the head. Toward the end of the eighth round he landed several punches to the head, prompting Mayweather to shake his head as if they didn't hurt, but by then Mayweather was bleeding from the nose and looked like he had taken some punishment.

Cotto, who fell to 37-3, was guaranteed his biggest purse ever, $8 million.