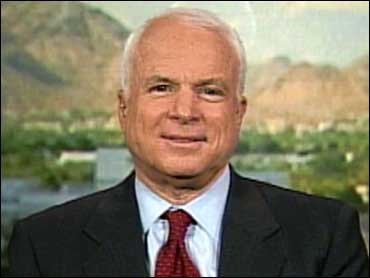 The Arizona Republican told The Early Show co-anchor Hannah Storm, "First of all, I think there's going to be a power struggle. There's a Mafia-like atmosphere there, and so there will probably be a struggle for power.

"But in the long run, with all due respect to (his) … family, the fact is Yasser Arafat has steadfastly refused to enter serious negotiations with Republican or Democrat presidents. So you may see the emergence of a leadership that will be wanting to make some progress, because Palestinians have suffered enormously under the leadership of Yasser Arafat, socially, economically and in every other way. So in the long-term, I believe you may see that the prospects for a renewed peace process and negotiations are pretty good."

McCain also indicated he thinks President Bush could well make good on his pledge to try to unite the nation now.

"First of all," McCain said, "I believe the president is committed to that. And historically, all presidents in their second term have had an eye on their legacies.

"You're not going to achieve (everything you want to, unilaterally) — even with 55 votes in the Senate — you need 60 if you're going to be able to ignore the other party and we don't have that.

"I am convinced that the president is dedicated to the proposition that he'll work in a bipartisan fashion. I think he'll bring Democrats in on the takeoff as well as the landing on certain agenda items which should be bipartisan in nature: reform of Social Security -- saving Social Security -- reforming the tax code and immigration reform are among those.

"But the overriding issue will continue to be the war on terror and specifically Iraq, as well as Afghanistan, but also the overall conduct of the war on terror. Terrorism is going to be with us not only for his term, but for a number of terms to follow."

As for how bipartisan Mr. Bush is likely to be in nominating and seeking confirmation of Supreme Court justices, McCain offered, "I believe what he'll probably do is at least make an attempt to sit down with the Democrats and talk about different nominees.

"I've seen the process work both ways: one that's terribly controversial with blood all over the place after it was over, or building kind of a consensus and then having a relatively easy process. I think if the president brings in the Democrats, which he will, and talks about some of his nominees, I think there is every prospect that during the president's honeymoon for the first year or so, that we could probably get something done that way without some kind of revisiting of some of the real tough ones like Clarence Thomas."

McCain chuckled when asked if he'd consider a Cabinet post and said he preferred to remain right where his is — in the Senate.