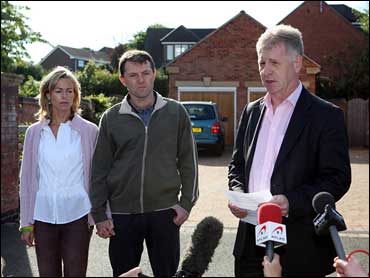 The family of Madeleine McCann called Tuesday for an end to the rampant speculation surrounding the case and said the focus should return to the search for the missing girl.

Family spokesman Clarence Mitchell said any suggestion Kate and Gerry McCann had harmed their daughter was "as ludicrous as it is nonsensical."

"Indeed, it would be laughable if it wasn't so serious," said Mitchell, standing beside the couple in the driveway of their home in Rothley, central England.

He said there were "entirely innocent explanations for anything the police may have found during their inquiries."

Portuguese police have named Kate and Gerry McCann, both doctors, as suspects in their daughter's May 3 disappearance from a resort in the southern Algarve region.

The couple strongly deny any involvement in the disappearance of Madeleine, who was 3 when she went missing. They have led a high-profile international campaign to find her.

Mitchell said he was prevented by Portuguese law from going into detail about the case, but stressed the McCanns would continue to cooperate with Portuguese authorities.

A former government official appointed to speak for the McCanns in the weeks after Madeleine's disappearance, Mitchell resigned from his government job this week to take up a full-time post as their spokesman.

Speaking to CBS News Early Show co-anchor Julie Chen on Tuesday, Mitchell said he was aware of reports in the Portuguese media that a judge had decided not to bring Kate or Gerry back to Portugal for further questioning.

Asked whether British authorities may seek to get involved in the investigation into the McCanns, he reiterated that he could not comment on legal proceedings, but said he was "not aware of any plans for British police to act on behalf of the Portuguese police to re-interview Kate."

"The McCanns, of course, are more than willing to go back to Portugal to be interviewed if necessary. They have nothing to hide," he added.

"The focus must now move away from the rampant, unfounded and inaccurate speculation of recent days to return to the child at the very center of this: Madeleine," Mitchell said earlier at the news conference. "The task is simply to find her. Kate and Gerry are again urging everyone to keep looking as they firmly believe she could still be alive."

A Portuguese investigating judge is examining the police file on Madeleine's disappearance and could decide this week what steps should be taken next.

Forensic tests conducted at a government laboratory in Britain found evidence indicating that DNA from Madeleine was in the trunk of a rental car the parents used after her disappearance.

However, Portugal's national police chief, Alipio Ribeiro, said last week that the forensic tests on the car were not conclusive and that he expected the investigation to continue.