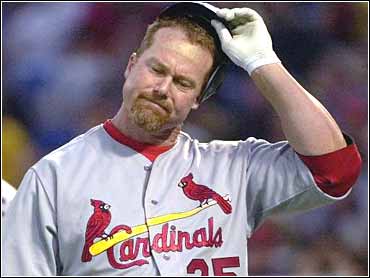 The St. Louis Cardinals plan to activate Mark McGwire from the disabled list Sept. 1, and use him as a pinch hitter. McGwire has other ideas.

The slugger, out since July 6 with a knee injury, wants to be a full-timer when he returns. He has not pinch hit this season.

"I'm bored and frustrated and saddened by not playing," McGwire said. "If I'm going to play, I'm going to play nine innings. When and if I come back, I'll be playing. I'm not pinch hitting."

That would be news to manager Tony La Russa.

"I don't care if he just walks up there and stands," La Russa said. "I don't think there's a manager around who wouldn't manage around him or who wasn't aware of him.

"He can stand up there flat-footed and hit the ball in the seats or draw a walk or get a base hit. How do you defend him?"

La Russa would prefer to have McGwire in the lineup, but the manager would take being able to use the first baseman in some capacity over not having him available at all.

"He would be a terrific weapon," La Russa said. "We don't want to use him that way, but we need every weapon we can get."

McGwire has leveled off in his recuperation from patella tendinitis. Trainer Barry Weinberg said he thought McGwire would play again this season, but admitted he could be wrong about that.

McGwire has missed two Cardinals trips and probably won't travel with the team on the next one, either, when St. Louis leaves Thursday for Atlanta.