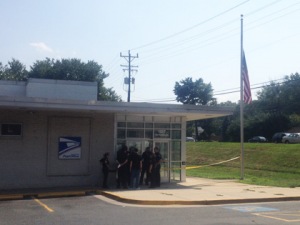 Police said the other man, 58, was at the counter, when he was asked to fill out some paperwork. After he stepped to the side to do so, the clerk at the counter told him that it was okay to return, according to the Washington Post.

The suspect, apparently thinking that he had cut the line, exited and waited in the vestibule.

Then he allegedly attacked the 58-year-old man. Two female postal workers intervened and at least one subdued the attacker with the use of pepper spray.

Authorities told WUSA that their intervention may have saved the victim's life.

Police told the Washington Post that he had been taken to an area hospital and was in serious condition, with injuries not considered life-threatening.

The suspect drove away, but Montgomery County police  caught up with him, and took him into custody, according to WUSA.

The Washington Post reported that the man was not immediately named, because he had not yet been formally charged.