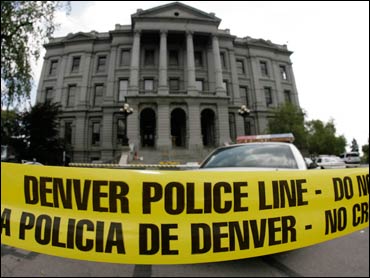 President Bush is resuming his August vacation at his Texas ranch after a two-day swing through Colorado and New Mexico.

From the ranch, the president called Israeli Prime Minister Ariel Sharon on Thursday in an effort to halt an escalation of violence in the Middle East.

"Both leaders agreed on the need to avoid escalating the situation in the region," McCormack said.

On his brief trip off the ranch, Mr. Bush promoted many of the issues on his policy agenda and raised cash for Republican candidates.

CBS News White House Correspondent Mark Knoller reports the president made education his top priority on the trip, although his education reform bill is still bottled up in Congress. At an elementary school in Albuquerque, he pressed for his teaching initiatives — including reading programs that he says are "based on sound science."

"(It's) not based upon some feel-good curriculum, but based upon what works," he said. "Phonics works by the way, and needs to be integrated into the reading program all across America."

Speaking later to members of a Hispanic Chamber of Commerce on a sun-baked city street, the president made a strong pitch for allowing Mexican trucks access to U.S. roads if they meet normal safety standards.

"Oh, I know there are some voices that want to wall us off from Mexico," Mr. Bush said. "I say to them they want to condemn our neighbors to the south to poverty, and I refuse to accept that type of isolationist and protectionist attitude."

He called proposed tougher standards for Mexican trucks that cross the border "discrimination against Mexico." Allowing Mexican trucks into the United States under rules set by the North American Free Trade Agreement, rather than tougher ones, would "help prosperity spread its roots throughout our neighborhood," Mr. Bush said. That, he said, would be a good thing for the United States.

Click here for a closer look at the Bush presidency.
On Wednesday evening, the president turned his attention to politics, raising $450,000 to help elect Sen. Pete Domenici, R-N.M., to a sixth Senate term.

He also renewed an attack begun in Denver on those who say his $1.35 trillion, 10-year tax cut will bring back high budget deficits.

Excessive spending and not tax cuts are the culprits, Mr. Bush said, and he pledged to fight to keep spending within limits of the budget he submitted to Congress.

"If not, I'm going to use the veto pen of the president of the United States to keep fiscal sanity in Washington, D.C.," he said.

A day earlier in Colorado, the president helped thin brush in a fire prone forest in Rocky Mountain Nationl Park. He also watched the Colorado Rockies play the Atlanta Braves.

Mr. Bush has nothing on his public schedule until he flies to Milwaukee next Monday to address the annual convention of the Veterans of Foreign Wars.

©MMI CBS Worldwide Inc. All Rights Reserved. This material may not be published, broadcast, rewritten, or redistributed. The Associated Press contributed to this report