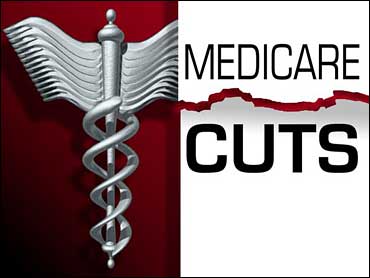 With Medicare scheduled to cut billions of dollars from doctors' payments, a group representing physicians is urging Congress to restore the money before elderly patients have trouble finding doctors.

Unless Congress acts by Nov. 1, "more physicians will be forced to make the difficult decision to stop taking new Medicare patients into their practices," said Dr. Donald Palmisano, president-elect of the American Medical Association. The next round of cuts, which take effect Jan. 1, will be announced next month.

Palmisano said doctors have already taken a 5.4 percent cut and are facing another 12 percent in cuts, equaling about $11 billion, over the next three years. At the current rate of cuts and inflation, Medicare doctor payments in 2005 will be below the 1991 level, Palmisano said.

"Physicians want to serve America's seniors, but they simply cannot afford to accept an unlimited number of Medicare patients into their practices while facing continued payment cuts," Palmisano said. "Medicare's foundation is crumbling."

He said an AMA survey found that 24 percent of physicians have already either placed limits on the number of Medicare patients they treat or plan to institute limits soon.

The reductions are required under a Medicare payment formula that relies on the state of the economy, which is now struggling.

Lawmakers and the Bush administration have said the payment formula is unfair and have expressed interest in finding a remedy for doctors. But the White House has balked at lawmakers' plans to send extra money to hospitals and other health providers as well.

Last week, White House budget chief Mitchell Daniels told lawmakers that the nation could not afford to give billions of dollars to health providers.

The House included $30 billion for Medicare providers as part of a prescription drug bill it passed. The Senate was unable to reach agreement on a prescription drug bill, but lawmakers have been pushing a separate bill that would send $43 billion to Medicare providers, including money for health maintenance organizations, nursing homes and rural hospitals. Lawmakers have said money is needed for those other providers because of cuts Congress made to Medicare when it balanced the budget in 1997.

But Daniels noted that lawmakers have restored some of the money from those 1997 cuts, including $32.7 billion sent to providers two years ago.

The effort to pass any type of bill for health providers is complicated by the fact that Congress is scheduled to adjourn in coming days. It is still unclear if the Senate can pass a bill and negotiate a compromise with the House in such a short time.

Michael Siegel, spokesman for the Senate Finance Committee, said Tuesday that efforts were still under way to pass a bill in the Senate this week.