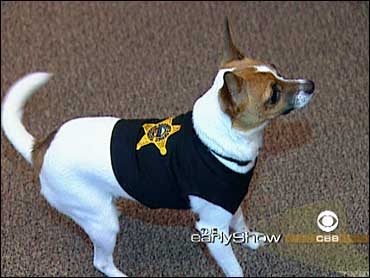 A lawman's best friend is a police dog, highly trained to find bombs, drugs, people who are lost, and more.

But The Early Show resident veterinarian, Dr. Debbye Turner, says the profile of the typical police dog may be about to change.

German shepherds, Labrador retrievers and bloodhounds are the macho breeds that most police departments use in their K-9 units.

But, says Turner, one innovative sheriff in the Midwest is trying out a new idea. He believes good police dog work can come in a small package.

A package named Midge, a 9-month-old, 7-pound Chihuahua-rat terrier mix, who's in line to become what's believed to be the world's smallest drug-sniffing dog.

Midge is the brainchild — and pride and joy — of Sheriff Dan McClelland of Geauga County, Ohio, who admits Midge isn't "your typical police dog, by any means."

More typical would be Midge's partner in crime-fighting, Brutus, a massive German shepherd.

So, why such a tiny police dog?

"The idea for a smaller drug dog came to me," McClelland told Turner, "when I was watching our large dogs search car interiors, in particular, and you put a German shepherd — 120-, 125-pound dog — in the interior of a car, and you watch how hard it is for them to turn around."

And McClelland admits Midge was an easy sell: "I'm the sheriff, so I just had to convince myself that this was an appropriate idea!"

McClelland began training Midge to sniff out marijuana when she was 3 months old. She is still learning, and not certified yet as an official K-9 police dog. But, Turner observed, her skills were obvious.

"We knew," McClelland says, "that, with the type of dog she is and with her size, she was never going to do crowd control, and she's not going to strike terror in the hearts of men, so (we decided to) make her a social dog."

And a social dog she is, Turner says, loved by children, and just about everyone else who sees her.

McClellan says he's confident that Midge is more than just a novelty and that she, and other little dogs, will grow to be a valuable member of law enforcement teams.

Says McClellan: "I believe there's no reason why a small dog can't be as effective as a big dog. She searches big rooms, like a big dog. Her advantage comes in going in small places. … I think we might be onto something.'

Midge is being trained as a so-called "single purpose" dog, specializing in sniffing out pot, unlike bigger dogs, such as Brutus, who are also used for crowd control and catching criminals.