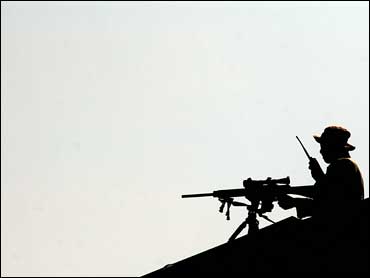 Police attempting to keep a restless crowd from entering a capacity-filled stadium fired their guns into the air on Sunday while Afghan President Hamid Karzai quickly wrapped up his speech inside, a military official said.

There were no immediate reports of injuries, and a government official said Karzai was not harmed.

The sound of what appeared to be gunfire rang out as Karzai abruptly ended his speech, sending a murmur through the crowd and prompting some in the audience to start to flee. Officials told the crowd to remain calm and said someone had thrown stones against a metal door.

But Gen. Mohammad Zahir Azimi, the Defense Ministry spokesman, said police fired into the air to prevent a restless crowd outside the stadium from entering. Azimi said the 15,000-person stadium was already full.

Karzai was speaking at a memorial ceremony for mujahedeen hero Ahmad Shah Massood, who was killed two days before the Sept. 11, 2001, attacks. Karzai told the stadium crowd that countries around the world were trying to help Afghanistan govern itself.

"We should use this to complete our desire. What is that desire? Afghanistan standing on its own feet, to feed itself and to secure itself," Karzai said as shouts and skirmishes could be heard in the background.

The president then abruptly closed with: "Dear sisters and brothers, respect for all of you. We're ending the session, goodbye."

A security official for one of the dignitaries on stage with Karzai told The Associated Press that a crowd of men from eastern Afghanistan was pushing on the stadium gate, ignoring shouted instructions from Karzai's security team to move back.

The official, who spoke on condition of anonymity because of the sensitivity of his job, said members of the crowd opened fire first
apparently into the air — and that police responded by also shooting into the air.

Karzai's security adviser Mohammed Qasim Fahim said that the president was not harmed.

In other violence, a roadside bomb explosion in southern Afghanistan killed one coalition soldier and wounded four on Sunday, the U.S.-led coalition said.

The attack in Helmand province, the world's largest poppy-growing region, came while the forces were carrying out combat operations about 5 miles west of Sangin. The nationalities of the service members were not released pending notification of family members.

Also in Helmand, a suicide attacker on a motorbike late Saturday against an American security firm killed one employee and wounded three, the Interior Ministry said. It did not identify the nationalities of those killed and wounded.

Afghanistan has seen a spike in violence this year, particularly in the country's south. More than 4,200 people, mostly militants, have died in insurgency-related violence in 2007, according to an Associated Press count based on figures from Afghan and Western officials.