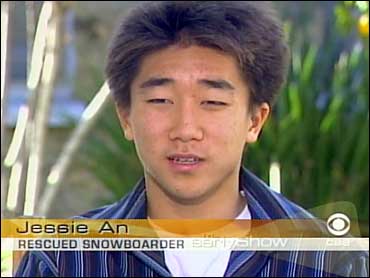 A California snowboarder is home after spending a night trapped on a rugged, frigid mountain in Utah.

reports
CBS News correspondent Vince Gonzales, it was Jessie An's sharp memory that pulled him through.

The 16-year-old An, of La Crescenta, Calif., disappeared on a mountain in Sandy, Utah, while snowboarding with his cousins. Rescuers fanned out immediately, Gonzales says.

But a storm, and the threat of avalanches, forced them to suspend their search, leaving An's mother to fear the worst.

"I just knew," she says, "if they stop the rescue, that the next morning he was going to be found dead."

But, Gonzales says, Jessie wasn't going to let that happen.

"I never thought I was gonna die," Jessie recalls. "I couldn't die. My family was waiting for me. That wasn't an option."

Despite the freezing, windy conditions and a lack of proper weather gear, he was found alive the next morning.

"The saving grace in this," says Laura Schaffer of the Snowbird Ski Resort, "was he was smart, and he built a snow cave, so he was able to keep himself warm."

Jessie has no survival training, so he turned to Hollywood for help, remembering something he saw in the 2000 movie "Vertical Limit."

"Igloos," Jessie says, "supposedly keep you warm, so I tried something like that."

What worked on the screen actually worked on the mountain, much to the relief of Donna, who says, "It was like a dead person coming alive, that's how my husband and I felt."

Jessie says he heard rescuers searching for him at one point, but was too tired to leave his shelter.

Though it was quite a scare, it wasn't enough to convince Jessie to stay off the mountain.

"I'm gonna go back up," he insists. "I love snowboarding."