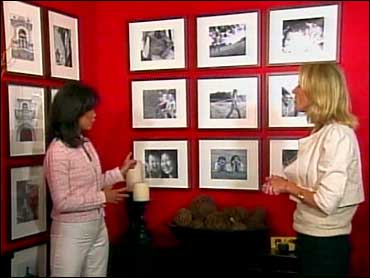 What better way to showcase a family album full of pictures than with a memory wall?

Design expert Susanna Salk says it's easy to transform an ordinary wall to create a special place that reflects both personal style and memories, and it sure beats keeping the photos hidden away in the albums.

On The Early Show Thursday, Salk and co-anchor Julie Chen went to a Manhattan Pottery Barn store, where Salk introduced viewers to several possible ways to put together a memory wall.

Salk says it is "a wonderful way to take all your memories in your photo albums and hang them on the wall and enjoy them in an everyday way."

She said it's a place to display your memories and emotions to inspire you on a daily basis, rather than being kept in an album or on a shelf.

There are many ways to fill a space, no matter how big or small, prominent or remote in your house, Salk noted, adding it is, in fact, more the space that will determine the kinds of things you'll want to hang and how than the other way around.

All it takes is some creativity and preparation, says Salk, who is special projects editor for House & Garden magazine.

A traditional memory wall typically has a very uniform look. To bring unity to the area, frames are hung in rows evenly spaced, and the same colors and shapes are repeated not only in the frames, but in the matting and photos. Depending on the space, they can be stacked high or wide or both; even from floor to ceiling! Rooms most conducive to memory walls are entry ways, hallways, staircases and small quirky areas.

Salk's traditional example featured stacked brown frames against a red wall. Painting the walls with a punch of color not only acts as a kind of frame for the frames, but makes the traditional way these frames are hung less serious. The white mats also give a nice contrast between the brown and the red. As for the actual images, a series of photos taken from one time period or by one photographer gives further unity and importance.

Tip: Achieve proper balance between your wall space and the frames you want to display by keeping them horizontally centered. Use a tape measure to find the center of your wall, and mark it with a pencil. Frames should be placed at eye level, approximately five feet from the floor, but they can hang higher if your room has high ceilings. And remember, the picture wire should always be pulled tightly upward, as if it were already hanging on the hook. Measure the distance from the centerline to the top point of the wire.

Tip: Placing adhesive tape on the wall where you hammer in the nail and hook will help prevent any plaster from chipping.

Tip: Smaller frames have more impact when grouped together around a larger one.

The use of ledges has become a popular option for displaying memories without committing a whole wall. This method enables you to swap out photos easily to create a gallery effect. You can update children's photos: Simply stack one on top of the old one to display, then reverse back when you feel they're getting too grown-up! You can have three ledges or one, but staggering looks best if using multiple ledges. Plus, ledges are a great way to mix up shapes, colors and sizes.

Falk featured white and gold frames on her ledges for a subtle mix of texture and color, giving some unity, but overlapping and staggering the height of the frames for variety. For this method, wider frames usually look better. Here, you can mix color with black and white images, but it doesn't have to be photos.

Tip: Aside from photographic images, you can display mirrors, magazines, maps, and/or postcards. Ledges may also offer a perfect home for a treasured object or collection.

Tip: If you have different images, keep the frames more unified. If you have more similar images, you can go for more variety on your frames

Using different sized frames and perhaps images in a less uniformed layout adds intrigue, instantly drawing the eye in. This works well for long hallways, bathrooms and quirky spaces. It can also continue to grow with the addition of more images on both sides.

Hanging different sized frames in an upright rectangular design adds interest to this memory wall, but the black and white images and black frames still unify the effect and calm the eye.

Tip: To determine how a grouping of pictures should be installed, think of them as one unit. Test an arrangement of pictures by laying everything out on a large table (or on the floor), playing with combinations until you hit on one that works. Use a paper template to trace around each object, then tape on the wall to make sure everything is level and evenly spaced. Loosely hammer in nails, cut away the template, then finish your hammering. Tools to have on hand: pencil, level, nails and hammer, adhesive tape, paper.