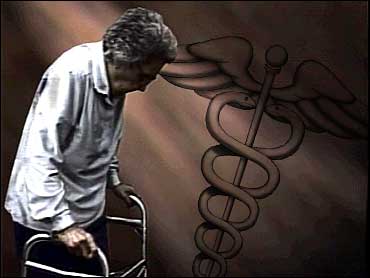 Few older men with hip fractures indicative of osteoporosis are tested or treated for the bone-thinning disease, which puts them at risk for debilitating illness and death, a study suggests.

The researchers and other osteoporosis experts blame the findings on doctors' and patients' unawareness that the disease does not only affect women.

"This is a very new concept in the medical field that in fact men get osteoporosis, too," said lead author Gary Kiebzak, chief research scientist at the Center for Orthopaedic Research and Education at St. Luke's Episcopal Hospital in Houston.

Of the estimated 10 million Americans afflicted with the disease, about 2 million are men. But the percentage of men affected rises with age, and those studied were aged 80 on average. Still, just 4.5 percent of them had been prescribed osteoporosis treatment after they were discharged from a hospital following their fractures. Up to five years later, only 11 percent had had a bone-density test and just 27 percent were using any kind of osteoporosis treatment, the researchers found.

Thirty-two percent of the men died within a year of their fractures. Many deaths were likely from ailments linked to the weakened condition of being immobilized by the fractures, which may have been preventable with treatment for osteoporosis or underlying conditions that can cause it, Kiebzak said.

The research involved 110 men and 253 women patients at St. Luke's, Kiebzak said. All had been hospitalized with hip fractures caused by a fall or other low-impact event — a telltale sign of osteoporosis, though in many cases bone-density tests were not done to confirm the diagnosis, he said.

Many men "are loath to consider that this may be a problem in them," said Dr. Eric Orwoll of Oregon Health & Science University. That's partly due to lack of awareness, but also is related "to the perception that osteoporosis is a woman's disease," said Orwoll, who was not involved in the study.

In men, low testosterone levels, alcoholism and excessive use of steroid medicines can cause low bone density and can often be treated, Kiebzak said. If those conditions are ruled out, bone-strengthening treatment including milk or calcium supplements and some prescription medicines marketed more for women can help head off fractures or full-fledged osteoporosis.

"I've actually prescribed Fosamax (an osteoporosis medication) for my male patients and had pharmacists call me and tell me that men don't have osteoporosis," said Lindberg, who was not involved in the research.

The study was funded in part by Merck & Co., maker of Fosamax, but the researchers said Merck had no role in conducting the study or analyzing the results.

While men were much less likely to receive osteoporosis treatment, women also were undertreated, the study found, echoing previous research. Just 27 percent of the women had any osteoporosis treatment at hospital discharge. That increased to 71 percent up to five years later. The death rate for women a year after discharge was 17 percent, about half that of men.