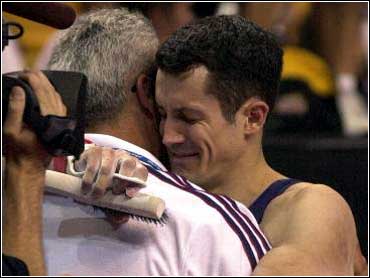 John Roethlisberger heard his name called, and all the emotions he'd kept bottled up for two agonizing days - not to mention three long years - came pouring out.

The tears flowed faster than he could wipe them off his face. His shoulders, so powerful when he's doing his routines, heaved as he sobbed. Finally, he simply bent over, overcome by his joy at making his third Olympic team.

"It's the sweetest, by far," the 30-year-old, now three-time Olympian said Saturday night. "Just what I had to do to get here made it the sweetest."

It's also tinged with a bit of sorrow. Combining scores from the Olympic trials and last month's U.S. Gymnastics Championships, the top four finishers were automatically put on the team. A selection committee then picked two more "at-large" gymnasts who could shore up the team's weaknesses.

Roethlisberger was seventh overall, but the committee picked him and sixth-place Morgan Hamm over Jamie Natalie, who finished fifth.

"If it were up to me, the last spot would have gone to Jamie," said Fred Roethlisberger, John's father and coach. "I'm not a rabble-rouser, but I've never been in favor of this selection process, not in the form of it today."

"I can see where they're coming from," he said. "Morgan is absolutely great on floor and vault and John's great on the other four events. It's a no-brainer."

Still, there was a part of Roethlisberger that felt awful. He's always believed the top gymnasts should be the ones that go to the Olympics or world championships. Earn it on the floor.

But he wanted this so badly. He's the one who has stuck it out as the Americans went from the depths of despair in the early 1990s to chasing a medal now. He came back despite ripping up his knee in 1998, finishing an astonishing second at nationals just a year later.

He's the undisputed heart and soul of the team, the one who can pump guys up so high even tough-guy Blaine Wilson is practically in tears.

"I was back there sweating with him," Wilson said. "I'm glad he's part of the team."

Roethlisberger never expected to go through this. One of the most consistent gymnasts, he rarely has one bad meet, let alone several disasters in a row. But he bumbled his way through nationals and Friday's preliminaries, and found himself in seventh place coming into Sunday's final.

"He just knew he had to do better," Fred Roethlisberger said. "It's hard to believe the whole fiasco of these 24 scores. These are the worst 24 scores he's ever put together in his career."

It could have been even worse had he not had a spectacular meet Saturday. From the time he stuck his vault, his opening event, he cruised. On the floor exercise, a disaster the three previous meets, he was smiling even before he finished his last tumbling pass.

He kept his hands raised in triump as he walked off the podium.

After his final routine, the still rings, he waved at the crowd with his right hand, then lifted his left fist before exchanging a long hug with his dad.

"I've been given an opportunity," Roethlisberger said. "Given what I've done the last few years, I feel I do deserve it. But I feel bad for Jamie. He deserves to be there."

So when the applause was over, the fans were gone and all of the photographs had been taken, Roethlisberger pulled Natalie into the Boston Celtics locker room at the Fleet Center. It was just the two of them, nobody else.

Roethlisberger, whose sister Marie was an alternate on the 1984 women's team that won the silver medal, told Natalie how important a role he was going to play.

"I told him after today, I don't want him again to say he's the alternate," Roethlisberger said. "He's every bit as much a part of this team as anyone else.

"He's not the alternate. He's an Olympian."

And, much to his joy, so is Roethlisberger once again.