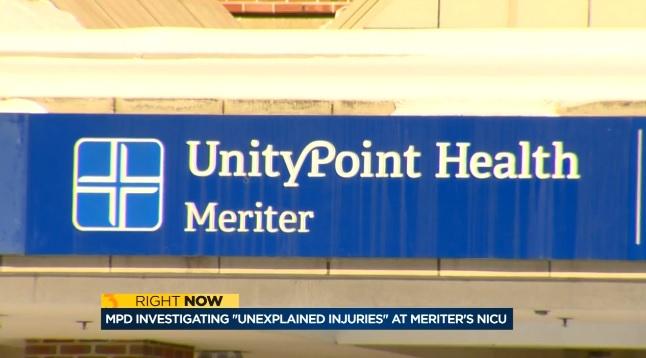 MADISON, Wis. -- Police are investigating unexplained infant injuries that were reported at a Wisconsin hospital. According to CBS affiliate WISC-TV, police were notified last week about injuries were reported in Meriter Hospital's Newborn Intensive Care Unit.

Hospital officials say they have suspended an employee who is connected to the investigation.

Madison police spokesman Joel DeSpain declined to release additional details about the injuries, but said a police detective unit specializing in crimes against children is investigating.

Hospital officials said they have added additional security and staff to the unit and have notified affected families.

"As the police investigation continues, we continue our own internal review and have implemented supplemental monitoring and security measures to enhance supervision in our Newborn Intensive Care Unit until the investigation is complete," the hospital said in a written statement.

Parents who recently had a baby say they are concerned for their child's safety and want their baby to have an exam, according to WISC-TV.

The intensive care unit is designated for infants born with complications or prematurity.

Police say they have made no arrests. The investigation is ongoing.