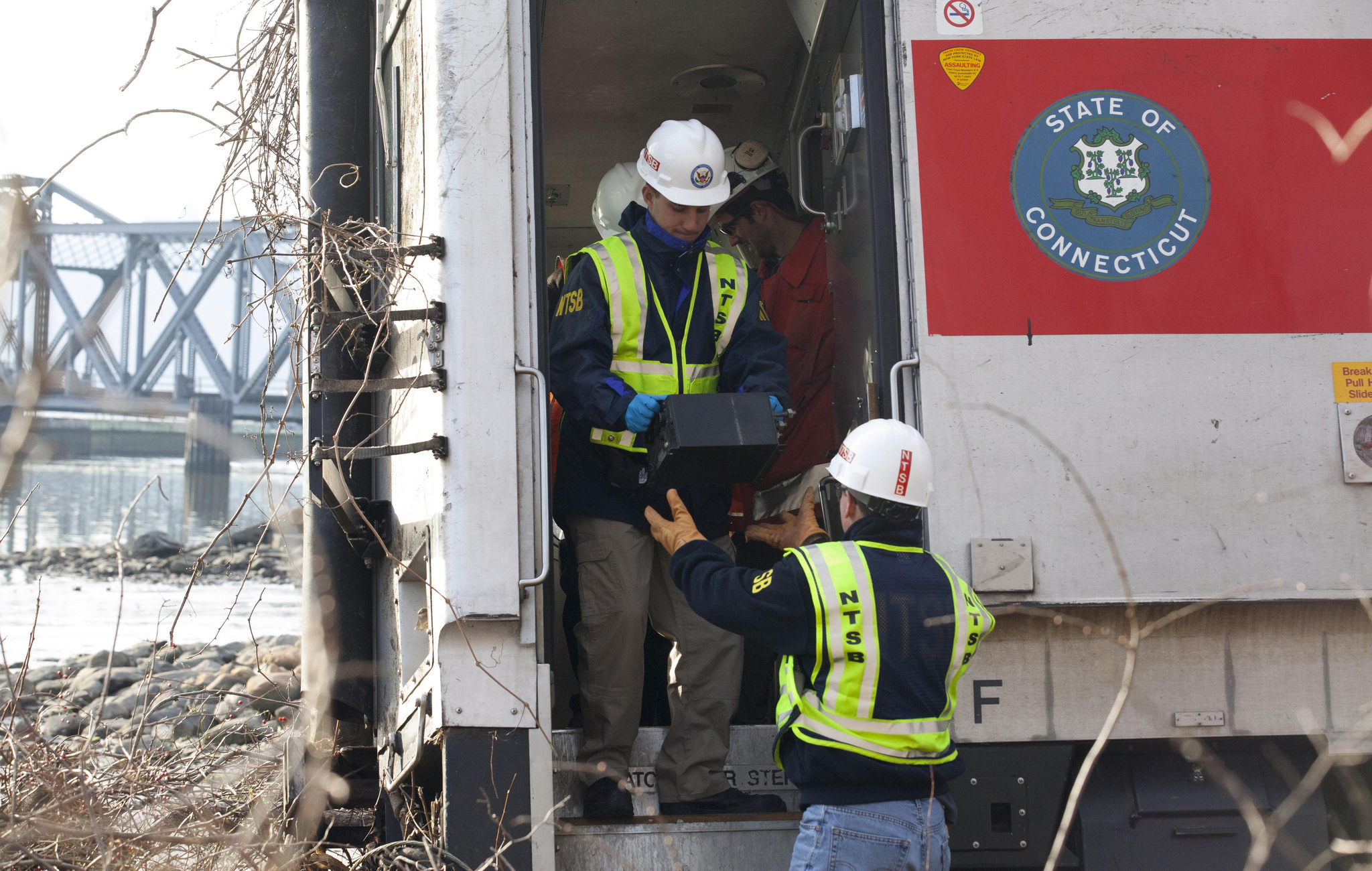 YONKERS, N.Y. -- A commuter train that derailed over the weekend, killing four passengers, was hurtling at 82 mph as it entered a 30 mph curve, a federal investigator said Monday. But whether the wreck was the result of human error or brake trouble was still unclear, he said.

Asked why the train was going so fast, National Transportation Safety Board member Earl Weener said: "That's the question we need to answer."

Weener said the information on the locomotive's speed was preliminary and extracted from the Metro-North train's two data recorders, taken from the wreckage after the Sunday morning accident in the Bronx.


Weener said the throttle went to idle six seconds before the derailed train came to a complete stop - "very late in the game" for a train going that fast" - and the brakes were fully engaged five seconds before the train stopped.

Asked whether the tragedy was the result of human error or faulty brakes, Weener said: "The answer is, at this point in time, we can't tell."

He said investigators are not aware of any problems with the brakes during the nine stops the train made before the derailment.

As investigators mined the data recorders for information, workers righted the fallen cars along the curve, a bend so sharp that the speed limit during the approach drops from 70 mph to 30 mph.

It takes about a mile for a train going 70 mph to stop, according to Steve Ditmeyer, an adjunct professor of railway management at Michigan State University and a former official with the Federal Railroad Administration.

"It went flying off,” said passenger Ryan Kelly. “I got thrown across, back and forth, and it came to a halt and there was just people screaming and lot of soot and dust everywhere."

Like many passengers, Joel Zaritsky had just dozed off as the train entered the sharp turn.

"You could hear an unbelievable screeching noise as it occurred,” he said. “It went to the side, you see the ground, and I said to myself, 'well, I think this is going to be it. We're done.'"

The wreck came two years before the federal government's deadline for Metro-North and other railroads to install automatic-slowdown technology designed to prevent catastrophic accidents. But with the cause of Sunday's wreck unknown, it was not clear whether the technology would have made a difference.

Metro-North's parent agency and other railroads have pressed the government to extend the deadline a few years because of the cost and complexity of the Positive Train Control technology, which uses GPS, wireless radio and computers to monitor locomotives' position and speed and stop trains from colliding, derailing or going the wrong way.

"Assuming the braking system was working normally, this crash would not have happened" if a PTC system had been in place, said Grayd Cothen, a former safety official with the Federal Railroad Administration.

He said the system would probably have alerted the engineer to the speed of the train and the approaching curve, and if the engineer had failed to brake manually, the PTC would have probably forced the train to stop.

"This incident, if anything, heightens the importance of additional safety measures, like that one," said Sen. Richard Blumenthal of Connecticut, which is also served by Metro-North. "And speaking for myself, I'd be very loath to be more flexible or grant more time."

Margie Anders, a spokeswoman for Metro-North's parent, the Metropolitan Transportation Authority, said that the agency began planning for a PTC system as soon as the law was put into effect.

"It's not a simple, off-the-shelf solution," she said. The engineer, William Rockefeller, was injured and "is totally traumatized by everything that has happened," said Anthony Bottalico, executive director of the rail employees union. He said Rockefeller, 46, was cooperating fully with investigators.

"He's a sincere human being with an impeccable record that I know of. He's diligent and competent," Bottalico said. Rockefeller has been an engineer for about 11 years and a Metro-North employee for about 20, he said.

The NTSB has been urging railroads for decades to install technology that can stop wrecks caused by excessive speed or other problems. Congress in 2008 required dozens of railroads, including Metro-North, to install the "positive train control" systems by 2015.

The Metropolitan Transportation Authority, which runs Metro-North, awarded $428 million in contracts in September to develop the system for Metro-North and its sister Long Island Rail Road. But the MTA has asked for an extension on the deadline to 2018, saying it faces technological and other hurdles in installing such a system across more than 1,000 rail cars and 1,200 miles of track.

While the train's seven cars and locomotive were gradually returned to their tracks Monday, the 26,000 weekday riders on the railroad's affected Hudson Line faced a complicated commute.

Many used shuttle buses and cars to get to work. But no major delays were reported during the early rush hour, railroad spokesman Aaron Donovan said.

Marketing worker Leanne Bloom normally takes the Hudson Line to work but drove to a stop on another line instead. She was surprised to find the train nearly empty.

"I was expecting long lines" at the station, she said. "But I made it very easily."

On Sunday, the train was about half full, with about 150 people aboard, when it ran off the rails around 7:20 a.m. while rounding a bend where the Harlem and Hudson rivers meet. The lead car landed inches from the water. In addition to the four people killed, 75 others were injured, according a Metro North spokeswoman Judy Galave. Many victims had been released from hospitals by Monday afternoon.

Seven were still in an intensive-care unit at St. Barnabas Hospital, some with spinal injuries, emergency department director Dr. David Listman said. And two patients were reported in critical condition at NewYork-Presbyterian Hospital.

The injured included five police officers who were heading to work, according to Mayor Michael Bloomberg, and a 14-year-old boy who was taking a weekend ride with his father on the same train the youngster usually takes to school.

The MTA identified the dead as Donna L. Smith, 54, of Newburgh; James G. Lovell, 58, of Cold Spring; James M. Ferrari, 59, of Montrose; and Ahn Kisook, 35, of Queens. Three of the dead were found outside the train; one was inside.

Lovell, an audio technician who had worked the "Today" show and other NBC programs, was traveling to Manhattan to work on the Rockefeller Center Christmas tree, longtime friend Janet Barton said. The tree-lighting ceremony is Wednesday night.

"He always had a smile on his face and was quick to share a friendly greeting," ''Today" executive producer Don Nash said in a message to staffers.

The derailment came amid a troubled year for Metro-North, and marked the first time in the railroad's 31-year history that a passenger was killed in an accident.

In May, a train derailed in Bridgeport, Conn., and was struck by a train coming in the opposite direction, injuring 73 passengers, two engineers and a conductor. In July, a freight train full of garbage derailed near the site of Sunday's wreck.