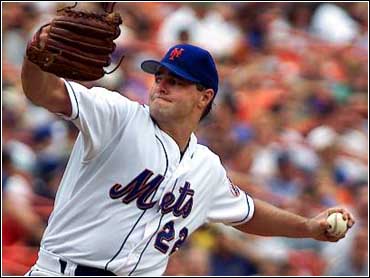 Al Leiter took a while to get comfortable. Robin Ventura wasted no time at all.

Leiter retired 18 of his final 19 batters and Ventura hit a two-run homer in the first inning Wednesday as the New York Mets beat the Cincinnati Reds 2-1 to finish their nine-game homestand with only one loss.

Reds starter Elmer Dessens, who threw seven innings on a warm, humid day, passed out while walking to the team bus after the game. The Reds said the right-hander was dehydrated and was taken to Mount Sinai Hospital to receive fluids.

Cincinnati loaded the bases against Leiter in the first and scored their only run in the second, but they couldn't get another runner on base against the left-hander.

"I think early on I didn't feel strong with my fastball velocity-wise," said Leiter, who was removed for a pinch-hitter in the seventh. "I felt I had to pitch more and move the ball around more. It took me a couple of innings to really get back to being aggressive."

Ventura, who returned from the disabled list last weekend, hit his 17th home run and first since June 24 as New York took two of three from the Reds following a three-game sweep against St. Louis

"When you're out two weeks, it's more about seeing the ball and feeling comfortable," said Ventura, who was 2-for-4 batting third for the first time this season. "I'm just seeing the ball better and I'm not pulling off the ball like I was before I went on the DL."

Leiter (12-4), won his second straight start after three consecutive losses. He allowed only four hits, struck out eight including his last three batters and walked one.

"Al probably idn't have his best stuff today, but he had his best competitiveness and gave us seven strong innings," Mets manager Bobby Valentine said. "He made big pitch after big pitch in the first inning."

The Mets, who have the most home wins in the NL with 37, are 16-5 in games started by Leiter this season.

John Franco, who worked out of a key eighth-inning jam in Tuesday night's 3-2 victory, allowed a two-out hit in the eighth before Turk Wendell threw one pitch, getting Dante Bichette to ground out. Armando Benitez pitched a perfect ninth for his 27th save in 31 chances. Benitez has not allowed an earned run in 17 1-3 innings.

"You're coming in and holding the other team down," said Franco of the bullpen that has five saves and a 0.93 ERA in its last 12 games. "You'd hate to see the starters have nothing to show for it with a no-decision or loss."

Chris Stynes doubled to lead off the game for the Reds and moved to third with two outs. Leiter walked Bichette and hit Dmitri Young to load the bases, but struck out Alex Ochoa to end the inning.

In the bottom of the first, Mike Bordick doubled and Ventura homered with one out, giving New York the lead.

"I thought all of Robin's swings today were Robin-esque," Valentine said. "He's a guy we're going to count on, depend on, lean on and jump on his back a few times before this thing is over."

The Reds cut it to 2-1 in the second when Benito Santiago and Pokey Reese singled to start the inning. Dessens sacrificed the runners to second and third and Stynes drove in Santiago with a sacrifice fly.

"If you don't get Leiter early, you aren't going to get him," Cincinnati manager Jack McKeon said.

Dessens (5-1) had won four straight starts after replacing Denny Neagle, who was traded to the New York Yankees on July 12. Dessens allowed six hits, struck out five and walked one.

"He pitched extremely well," McKeon said "We have to keep him on a roll. We pitched as good as we could and still lost two."

The Mets, who played without Edgardo Alfonzo and Mike Piazza, won by one run for the sixth time in their last seven victories.