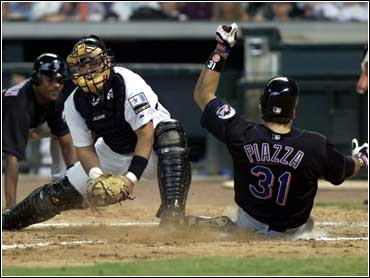 Piazza, showing no sign of his knee injury, went 4-for-4 and drove in four runs, and Robin Ventura also had four RBIs as the New York Mets routed the Houston Astros 10-3 Thursday to complete a 5-2 road trip.

"I felt good," Piazza said. "I had to make sure when I came back I was ready to go full throttle. I stayed relaxed and it didn't strain when I ran. I was only nervous on the slide to home (seventh inning) because the catcher can put a good tag on you."

Piazza, who mildly sprained his left knee Saturday, missed three games because of the injury, then homered and went 2-for-5 Wednesday in the Mets' 12-5 win.

On Thursday, he had RBI singles in the first and fifth innings, a double in the third and a two-run single in the eighth.

Ventura went 2-for-5, including a two-run double in the three-run seventh. Jay Payton homered and had an RBI single.

New York closed within 2 1/2 games of NL East-leading Atlanta, the closest the Mets have been to first place since July 2.

Jeff Bagwell homeed twice, the 20th multihomer game of his career and second this season. He is the first Houston player to hit 30 homers in five consecutive seasons.

"Well, I guess that means I've been consistent and that's the goal of any player but the loss is the main thing right now," Bagwell said. "It hurts, it still hurts. You can't get used to the losses. You're not supposed to."

"I didn't try to think too much. I tried not to put a name on it and just go out and pitch," said McKnight, sent back to Triple-A after the game.

"I really thought I did OK for the first time. I tried to pitch the same way I did in New Orleans. I nitpicked a little, but basically, I just tried to soak it all in."

McKnight was Houston's 21st pitcher of the season, two short of the team record set in 1965.

Piazza's RBI single put the Mets ahead in the first, but Bagwell's homer tied it in the bottom half. Ventura's grounder scored Piazza in the third, but Bagwell homered again in the fourth, his 31st of the season and Houston's team-record 169th, one more than the Astros hit last year.

Piazza's fifth-inning single, which followed Benny Agbayani's walk and Edgardo Alfonzo's single, put the Mets ahead for good and Payton's homer made it 4-2 in the sixth.

"I used the whole field, stayed away from the breaking ball and I didn't try to pull the ball," Piazza said. "I'm not pressing. When I hit well, I didn't press. I take what the pitcher gives me and try to stay away form the double play and get the runs home."

Ventura added an RBI double in the eighth off Jay Powell.

Raul Chavez doubled home a run in the ninth off Pat Mahomes.

After winning three of four in Houston, the Mets headed home to play San Francisco.

"We are playing pretty good right now," Mets manager Bobby Valentine said. "When you have a rested bullpen and have players healthy, you usually play good. And then you get Bobby Jones pitching a handful of good starts he's bee about as good a pitcher as we've had."