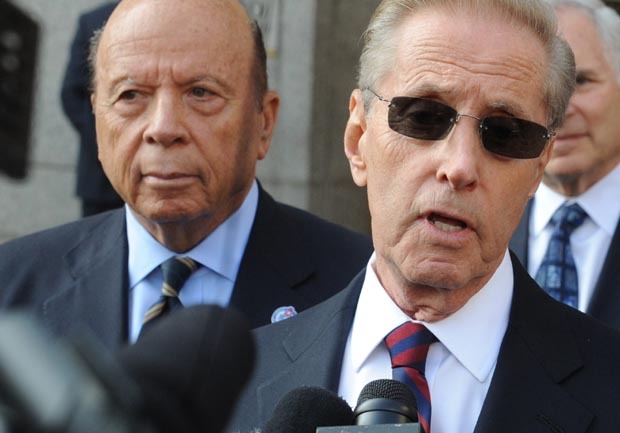 (AP) NEW YORK - The New York Mets' owners scored an early-season victory Monday, stabilizing the club's financial future in a deal with a trustee for Bernard Madoff's fraud victims that requires them to pay millions less than they might have — and lifts a dark cloud from a team whose dismal play seemed to mirror its misfortune in the owner's box.

Mets CEO Fred Wilpon and team President Saul Katz, co-majority owners, emerged smiling from a Manhattan federal courthouse after a judge announced the agreement, which makes it likely they'll pay much less than the agreed-upon $162 million, if any at all; guarantees they will owe nothing until the end of four years; and averts a high-profile civil trial.

"Now I guess I can smile, maybe I can take a day off, but I can't wait to get back to our businesses, which I love," Wilpon, sporting dark sunglasses, said outside court as he pledged to rejoin the Mets on Tuesday at spring training in Florida. He stood with Katz, who rested his hand on Wilpon's shoulder under a sunny sky.

After speaking, Wilpon gave a nod to the sagging faith some have had in recent years with owners who seemed mired in accusations that they knew Madoff was up to no good but kept silent because they were making lots of money on their investment.

In a lawsuit that demanded $1 billion from the Mets owners, Picard said Wilpon and Katz had meetings with Madoff in his office at least once a year, a privilege few investors enjoyed, and that Katz at times spoke directly with Madoff at least once a day.

Madoff is serving a 150-year prison sentence after revealing in December 2008 that he cheated thousands of investors of roughly $20 billion for years.

The judge noted the end of acrimony as he read a document that promised neither side will disparage the other or the agreement and that Picard will no longer accuse the Mets owners of being "willfully blind," a legal term central to the civil trial the deal eliminated. The litigation could have forced the team's owners to pay up to $383 million.

"All I have to say is, love is wonderful," Judge Jed S. Rakoff said smiling.

The deal was shaped so that the team's owners could owe much less than the $162 million they received in fictitious profits in the six years before Madoff's fraud was revealed.

The agreement calls for the sum to be reduced by money that would otherwise be paid for $178 million in losses claimed on behalf of dozens of accounts held in the name of defendants in the action against Sterling Partners, a business entity that includes the Mets owners, along with real estate, sports media and private equity interests.

David J. Sheehan, the lawyer for trustee Irving Picard, told the judge that $10 million in losses by Sterling Partners that was recovered by the trustee was already set for disbursement, an amount that would reduce the Mets owners' debt to $152 million.

The trustee says he has recovered 52 percent, or $9 billion, of claimed principal losses by all Madoff investors. More than $6 billion more has been identified but not yet secured.

"In a sense, we're now partners," Sheehan said outside court of the trustee and the defendants, whom Picard's lawyers had once criticized as men who turned a blind eye to every red flag of fraud before them as they withdrew $90 million of "other people's money" from the accounts of Ponzi schemer Madoff to cover day-to-day operations of the team.

But despite the brightening of skies, the Mets owners are not out of the woods.

A $25 million loan from Major League Baseball is due to be paid back by the end of March, and another $40 million is owed to Bank of America. The club is selling roughly 10 limited partnerships of $20 million each, with Steve Cohen of SAC Capital Advisors agreeing to buy one unit and the Mets' current ownership and television partners agreeing to purchase six.

The team's on-field future remains murky, as well. The Mets have finished with a losing record for three straight seasons, and attendance at Citi Field declined from 3.15 million when it opened in 2009 to 2.35 million last year, the team's lowest home total since 2004.

General manager Sandy Alderson said the team lost $70 million last year, and the Mets' payroll has dropped from $142 million at the end of last season to about $95 million following the departures of All-Stars Jose Reyes, Carlos Beltran and Francisco Rodriguez, the largest one-year drop in baseball history. Star third baseman David Wright is entering the final guaranteed year of his contract, and the Mets could listen to trade offers this summer.

Still, the deal announced Monday left Wilpon and Katz, who together personally promised to guarantee $29 million for the trustee, speaking confidently of the team's future.

Katz said outside the courthouse that the Mets were on secure financial footing. "Always was," he said.

Wilpon said: "As we've said from the very beginning when this lawsuit started, we are not willfully blind, we never was, we acted in good faith, and we're very pleased that this settlement bears that out. That's very important to us."

As he stepped into a car, Wilpon declined to discuss how the settlement might affect the club's efforts to raise additional cash. Earlier, he said he was resuming work at "trying to bring the New York Mets back to prominence."

The road to a settlement may have been paved weeks ago when Rakoff ruled Picard could try to recoup only $386 million from the Mets owners.

Former New York Gov. Mario Cuomo, who acted as mediator, said the settlement lets Picard focus on 800 pending lawsuits against those who profited from their investment with Madoff.

He said Picard and the Mets owners "avoided the risks and uncertainty of ... a long, bitter and expensive trial" in a deal that was fair and reasonable.

"Nobody gets everything they want in a settlement. But both sides helped their causes," Cuomo said.

Dodgers Hall of Fame pitcher Sandy Koufax had been scheduled to testify in the trial about the intentions of Wilpon, who encouraged him to invest with Madoff.