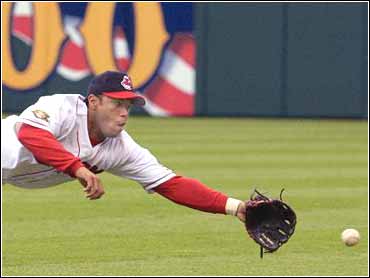 Of late in New York, the off-season baseball talk has been all about the New York Yankees and their pursuit of Oakland A's slugger Jason Giambi.

But on Tuesday, it was the other New York team making big waves with a blockbuster, eight-man trade centering on All-Star second baseman Roberto Alomar, who will come to New York from the Cleveland Indians.

The trade, the first big deal of the winter meetings, was first reported by Newsday on its Web site.

The deal - made between Mets general manager Steve Phillips and new Cleveland GM Mark Shapiro - was completed between midnight and 12:30 a.m., a source said. The Mets and Indians called a news conference but did not announce the subject.

It was the second major move in four days for the Mets, who dealt third baseman Robin Ventura to the Yankees last Friday for outfielder David Justice. It means New York most likely will move Edgardo Alfonso from second base to third next season. And, with the departure of Lawton, it's likely the Mets are not done, because they lose a key outfielder - and offensive asset - who may need to be replaced.

The 33-year-old Alomar, who played three seasons in Cleveland, is a 12-time All-Star who hit a team-high .336 this year with 20 homers, 100 RBIs and 30 steals. Alomar is widely considered to be the best second baseman in the game.

After winning the NL pennant in 2000, the Mets failed to make the playoffs this year, finishing with the fewest runs and lowest batting average in the major leagues and the second-fewest homers in the NL.

The deal creates payroll flexibility for the Indians. Cleveland owner Larry Dolan told Shapiro to trim $15 million off last season's $91 million payroll. Alomar will make $8 million next season and his contract contains an $8 million team option for 2003. The Indians also had been exploring a deal for shortstop Omar Vizquel.

The Indians also will get the services of Escobar, 23, considered one of the most prized prospects in the Mets' farm system. Riggan, a 27-year-old right-hander, was 3-3 with a 3.40 ERA in 35 relief appearances for New York.

The remaining players were not be immediately identified.

Alomar's departure leaves a hole at second base for the Indians. John McDonald or Jolbert Cabrera could be used there or he club may have another deal in mind.