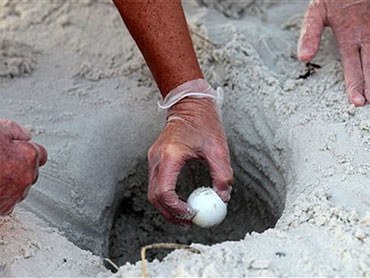 Police in Mexico say six suspects have been detained on the southern Pacific coast with 3,756 illegally harvested eggs from protected sea turtles.

Guerrero state police say the six men were caught with the Olive Ridley turtle eggs in a coastal town east of the resort city of Acapulco.

The eggs were stuffed in sacks and were apparently being transported for sale or consumption.

Olive Ridley turtles are protected under Mexican law. They nest on the Mexican coast, and harvesting their eggs is punishable by prison terms of one to nine years.

The six men were detained Friday.