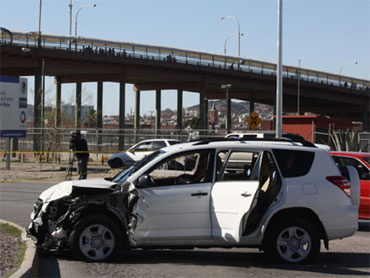 The slayings came amid a surge in bloodshed along Mexico's border with Texas and drew condemnation from the White House. Mexico's president expressed outrage and promised a fast investigation to find those responsible.

Mexican authorities put suspicion on a gang of hit men allied with the Juarez drug cartel based on "information exchanged with U.S. federal agencies," according to a statement Sunday from the joint mission of soldiers and federal police overseeing security in Ciudad Juarez.

But police offered no information on a possible motive in the slayings. U.S. State Department spokesman Fred Lash said only that the three dead people were at the same party before the attacks that occurred minutes apart Saturday afternoon.

The U.S. consulate in Ciudad Juarez, shut for Monday's Mexican national holiday, also will be closed on Tuesday as "a way for the community to mourn the loss" of the victims, said consulate spokesman Silvio Gonzalez. It was the second U.S. border consulate closed because of violence in the last month. The consular office in Reynosa, across from McAllen, Texas closed for several days in late February because of gun battles in the area.

Several U.S. citizens have been killed in Mexico's drug war, most of them people with family ties to Mexico. It is very rare for American government employees to be targeted, although attackers hurled grenades at the U.S. consulate in the northern city of Monterrey in 2008.

The atmosphere of violence in Juarez had been creeping closer to U.S. offices for some time: on Friday, the consulate put a bar just around the block from its office off limits to U.S. government personnel "due to security concerns."

The State Department authorized U.S. government employees at Ciudad Juarez and five other U.S. consulates in northern Mexico to send family members out of the area because of concerns about rising drug violence. The cities are Tijuana, Nogales, Nuevo Laredo, Monterrey and Matamoros.

Lash said the decision was based not only on Saturday's killings but also on a wider pattern of violence and threats in northern Mexico in recent weeks. The State Department noted the U.S. Embassy in Mexico City has advised American citizens to delay unnecessary travel to parts of the Mexican states of Durango, Coahuila and Chihuahua.

The consulate employee and her husband, both U.S. citizens, were shot to death in their car near the Santa Fe International bridge linking Ciudad Juarez with El Paso, Texas.

The woman was shot in the head, while her husband suffered wounds in his neck and arm. Their baby, who appeared to be about 1 year old, was found unharmed in the back seat, said Vladimir Tuexi, a spokesman for the Chihuahua state prosecutors office.

The pair was identified as consular employee Lesley A. Enriquez, 35, and her husband, Arthur H. Redelfs, 34, by Robert Cason, Redelfs' stepfather. Redelfs was a detention officer at the El Paso County Jail, he said.

Cason declined to discuss the welfare of his grandchild. "I don't want to give any more information to the psychotics out there," he said.

Tuexi said the baby was in the custody of Mexican social services.

The U.S. government did not give any details on Enriquez's job at the consulate, and Cason said he didn't know what she did there. A neighbor of Enriquez, Zonia Rivas, also didn't know.

"I do know she just went back to work about three months ago after having her baby," she said.

Ten minutes before that killing, police in another part of the city found the body of the husband of a Mexican employee of the consulate.

Jorge Alberto Salcido Ceniceros, 37, a Mexican citizen, was shot to death in his car, while his two children, ages 4 and 7, were wounded, according to the state prosecutors office. The children were hospitalized.

Civilians have increasingly gotten caught in the middle of drug gang violence that has made Ciudad Juarez one of the deadliest cities in the world, with more than 2,500 people killed last year alone.

The three died during a particularly bloody weekend in Mexico, with nearly 50 people killed in apparent gang violence. Nine people were killed in a gang shootout early Sunday in the Pacific resort city of Acapulco, one of Mexico's spring break attractions.

Other stretches of the frontier with Texas that had been relatively quiet have seen a surge of killings recently. U.S. officials briefly closed the consulate in Reynosa because of violence, which Mexican authorities have blamed on the breaking of an alliance between two drug gangs.

The office of Mexican President Felipe Calderon's office said he "expresses his indignation" and "his sincerest condolences to the families of the victims" of Saturday's attack.

U.S. President Barack Obama was "deeply saddened and outraged" by the killings, the White House said.

"He extends his condolences to the families and condemns these attacks on consular and diplomatic personnel serving at our foreign missions," the statement said. "In concert with Mexican authorities, we will work tirelessly to bring their killers to justice."

U.S. Secretary of State Hillary Clinton said "these appalling assaults on members of our own State Department family are, sadly, part of a growing tragedy besetting many communities in Mexico."

"They underscore the imperative of our continued commitment to work closely with the Government of President Calderon to cripple the influence of trafficking organizations at work in Mexico," she added. "This is a responsibility we must shoulder together."
By Associated Press Writer Olivia Torres; AP writers Philip Elliott in Washington and Terry Wallace in Dallas contributed to this report