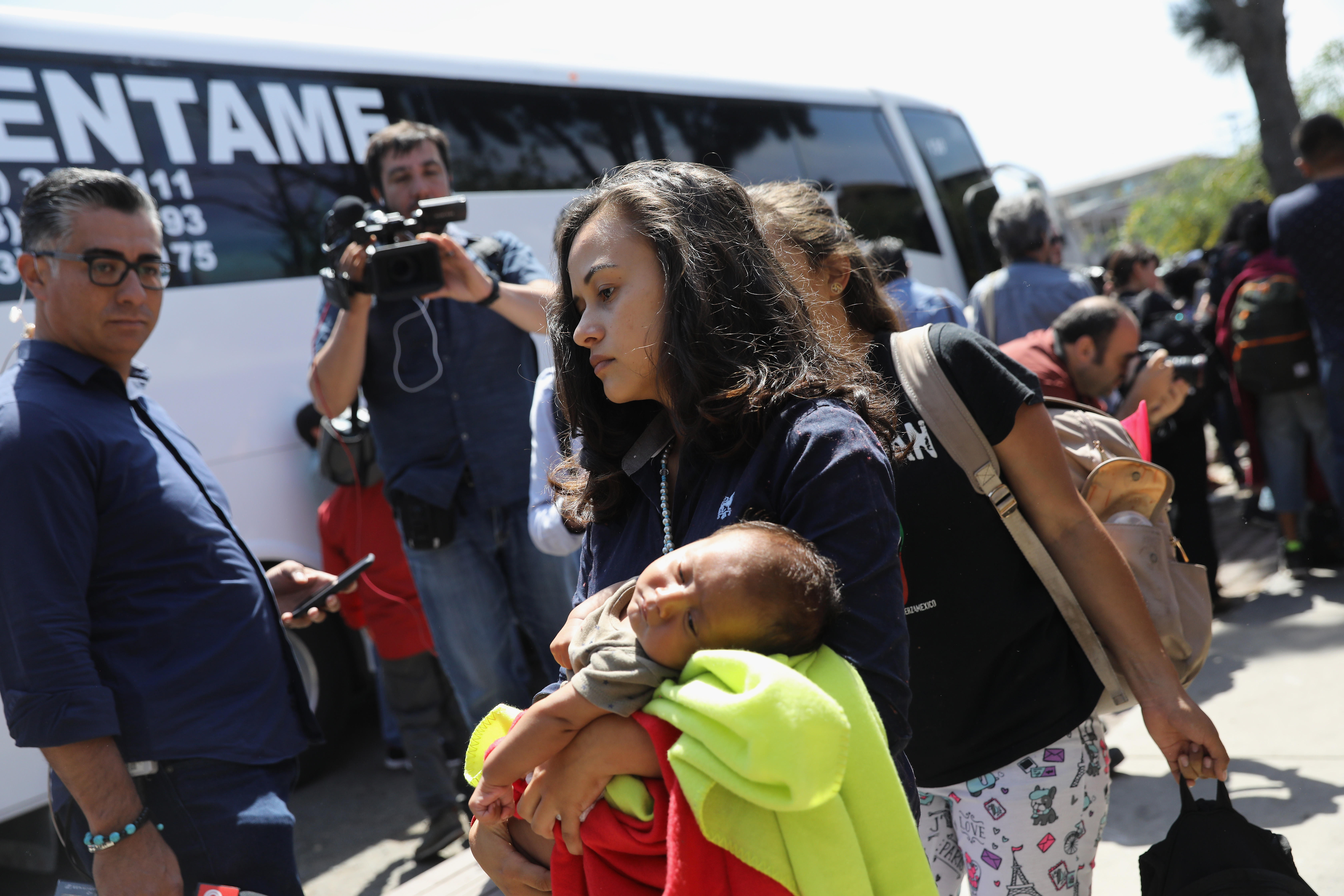 TIJUANA, Mexico -- About 130 Central Americans, mostly women and children, have arrived at the U.S. border with Mexico in a "caravan" of asylum-seeking immigrants that has drawn the fury of President Donald Trump. Two busloads arrived late Tuesday in the Mexican border city of Tijuana at two migrant shelters just steps from one of the most fortified stretches of border separating the U.S. from Mexico. They joined another 50 or so who arrived in Tijuana over the last week or two.

Four more busloads of about 200 Central Americans -- mostly women and children but including some men -- were expected to arrive in Tijuana Wednesday, said Alex Mensing, project coordinator for Pueblos Sin Fronteras, which is organizing the effort.

U.S. lawyers planned to lead clinics later this week on U.S. asylum law to tell the immigrants what to expect when they seek asylum. The first groups plan to try to enter the U.S. on Sunday at San Diego's border crossing.

Mr. Trump and senior aides have portrayed the caravans and the asylum seekers as evidence of a dysfunctional border and a serious threat. The president tweeted this week that he has issued orders "not to let these large Caravans of people into our Country. It is a disgrace."

The caravans have been a fairly common tactic for years among advocacy groups to bring attention to Central American citizens seeking asylum in the U.S. to escape political persecution or criminal threats from gangs.

But the latest one drew more attention because Mr. Trump's attention from almost the moment it began on March 25 in the Mexican city of Tapachula, near the Guatemalan border. While it slowly traveled across Mexico, Mr. Trump used it as an example to try to win more support for his planned border wall -- even though the asylum-seekers plan to turn themselves in to border inspectors.

Taxi driver Jovanne Torres from El Salvador said Wednesday after arriving in Tijuana Tuesday that Mr. Trump's attacks on the caravan make him doubt whether he'll succeed in getting asylum for himself, his wife and his daughters ages 4 and 10 months -- but he still plans to try.

Torres, 37, said he fled his hometown near the country's capital of San Salvador and joined the caravan days after a gang threatened to kill him and his wife when he refused to give a free ride to a gang member.

He thinks he could be killed if he goes home and decided against seeking asylum in Mexico because he wants to join relatives in Houston.

"Trump's words have made it difficult for us," he said.

This caravan's numbers pale compared to the roughly 200,000 people who were arrested at the border in Texas' Rio Grande Valley during the spring of 2014. Thousands of Haitians seeking to enter the U.S. turned themselves in to U.S. border inspectors at the Tijuana-San Diego border crossing -- the nation's busiest.

U.S. Customs and Border Protection has space to hold about 300 people at the crossing, said Pete Flores, director of the agency's San Diego field office. It turns them over to U.S. Immigration and Customs Enforcement to determine if they should be held long-term of if they can be released while their cases are pending, often wearing ankle monitors that track their movements.

The San Diego border crossing was so overwhelmed by Haitians in 2016 that U.S. officials worked with their Mexican counterparts to create a ticketing system that let the Haitians in over time. Some waited their turn in Tijuana more than five weeks.

More recently, asylum seekers have had to wait at most only a few hours, never overnight, Flores said. If asylum-seekers make it through initial screenings with asylum officers by establishing "credible fear" of being returned to their homelands, they are allowed in and face what can be lengthy proceedings before U.S. immigration judges.

"I don't see this caravan thing being a big deal," she said. "I see it as something the port will be able to handle competently and professionally."

Nielsen said Wednesday that anyone who makes false claims to immigration authorities is subject to criminal prosecution. The same goes for anyone who assists or coaches immigrants on making false claims.

Nielsen's threat is consistent with the administration's narrative of widespread "asylum fraud" and claims that asylum-seekers are coached on what to tell U.S. authorities.

The secretary also said asylum seekers in the caravan should seek protection in the first safe country they reach, including Mexico.

The Juventud 2000 migrant shelter, on the edge of Tijuana's red-light district, is filled with dome-shaped tents to accommodate more than 200 arrivals.

Its director, Jose Maria Garcia Luca, said two previous caravans in May and November of last year had about 100 people each. Those who sought asylum reported no significant delays entering the U.S.

"This is nothing like the Haitians," Garcia Luca said. "That was chaos."