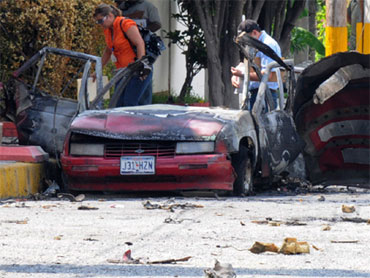 The prosecutor, Roberto Jaime Suarez, disappeared Wednesday in the town of San Fernando, where the bodies of the migrants were found, the Tamaulipas state attorney general's office said in a statement. A transit police officer in the town is also missing.

President Felipe Calderon, speaking during a forum on security, said Suarez, a Tamaulipas state prosecutor, was involved in the initial investigation of the massacre, which authorities have blamed on the Zetas drug cartel. The federal Attorney General's Office has since taken the lead in the case.

The two car explosions happened less than 45 minutes apart in Ciudad Victoria, the Tamulipas state capital, the Attorney General's Office said. The first exploded in front of the offices of the Televisa network and the second in front of transit-police offices.

There were no injuries, though both caused some damage to buildings and knocked out the signal of the Televisa network for several hours. The explosion outside Televisa was felt for several blocks.

The network described the explosion as a car bomb, but the state attorney general's office said the cause of the explosions have not been determined.

If confirmed, it would mean a total of four car bombs in Mexico this year - a new and frightening tactic in the country's escalating drug war.

The first exploded July 5 in the northern border city of Ciudad Juarez, across the border from El Paso, Texas, killing a federal police officer and two other people. The second, which caused no injuries, happened just two weeks ago in front of police headquarters in Ciudad Victoria.

Just north of Ciudad Victoria, heavily guarded investigators working at a private funeral home in San Fernando identified 31 of the 72 massacred migrants, whose bodies were discovered on a ranch Tuesday, bound, blindfolded and slumped against a wall.

Those identified include 14 Hondurans, 12 Salvadorans, four Guatemalans and one Brazilian, the state attorney general's office said.