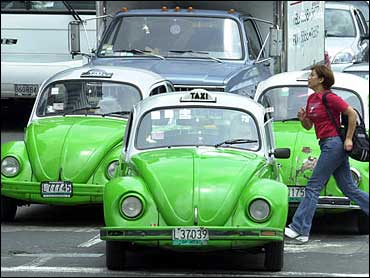 Mexicans remained faithful to the old Volkswagen Bug long after other countries abandoned it, and the "vocho" repaid that loyalty by being remarkably durable, adaptable and fixable.

But a flood of other small, inexpensive cars has lured away drivers and revealed an awful truth: The Bug's time has passed. So the world's last new Bug - not to be confused with the new Beetle - will roll off an assembly line in the city of Puebla this summer, and some Mexicans are already in mourning.

The Bug has been famous for its shortcomings ever since it went on the Mexican market in 1964. But because it became "the people's car" to a greater extent than it ever did in Germany, motorists just shrugged.

The public loved it for its simplicity and ruggedness, important factors in a country where rural mechanics often come armed with only screwdrivers, pliers and a bit of wire.

"I don't think any car will ever have the impact, the significance that this car did," said Raul Ramirez. "You can find spare parts practically at the corner grocery store, and you can fix them anywhere."

Fixing them anywhere was in fact what Ramirez was doing. Idled at the side of a traffic circle on Mexico City's main boulevard, he was watching oily smoke pour out of the engine compartment of his white 1999 Bug, a burn-mark crackling the paint.

Ramirez, meanwhile, was performing classic Bug repair techniques: opening the engine compartment to allow heat to escape, jiggling wires and checking to see if the fan belt had broken.

"It must be the catalytic converter," Ramirez concluded. "That wouldn't have happened on the original vocho." Catalytic converters were added in the 1990s in a desperate attempt to get the Bug to meet emissions standards.

Bug lovers also put up with the fact that the cars never had a trunk, any sort of reliable heating system or a motor more powerful then 45 horsepower. And they were loud.

"I think it was even noisier inside the car than outside, and that was noisy," said Teodoro Moreno, the 37-year-old leader of a Bug aficionados club in Morelia, Mexico.

The Bug's design has had only minor changes since a prototype was developed under Adolf Hitler in 1934. Production for the U.S. market stopped in 1977 because the car didn't meet safety and emissions standards, and Brazil stopped making them in 1996.

But the demise of the Bug was due more to other cars' improvements than to its own defects. After more than 50 years on the market - with 1.69 million sold in Mexico, about 500,000 of which are still on the streets - technology and free trade caught up with the Bug, and surpassed it.

In 1994, Mexico began signing a series of free trade and investment agreements, and a host of cheap subcompacts invaded Mexican dealerships. At prices similar to a new Bug's $6,500 tag, they offered more safety, horsepower and room.

By early 2003, sales of the Bug fell to less than one-quarter of their former level.

"Even though the government subsidized it, when new competitors showed up, its sales plunged," said Marcos Bureau, editor of Vochomania, a magazine for Bug lovers.

The company isn't giving a precise date for the end of production, saying only it will happen sometime this summer, after it trots out a retro "special edition" in July to mark the demise of the world's all-time top-selling car (21.5 million were sold worldwide.)

The approximately 300 workers on the Bug production line will be offered other jobs at the Puebla plant, which also makes the Jetta and the New Beetle models, Volkswagen officials say.

"It's a little sad. It's been my whole life," said Armando Pasillas, 60, who has been assembling Bugs here since 1967. Nearby, workers hammered out the last Bugs at Volkswagen's plant in Puebla, just east of Mexico City. Hammering is literally involved in the decidedly low-tech production line, and even a wooden cudgel is used to bang recalcitrant parts into place.

Parts and service - such as is needed - will still be available, though.

"Vochos? That's the easiest thing to get parts for. They're all over the place," said Mexico City mechanic Eduardo Morales, who offers complete Bug tune-ups for $40.

And even after the last one rolls off the assembly line, the legend will remain. Almost everyone here has a Bug story.

"Almost every middle-class family in Mexico has owned a vocho," said Bureau, "so this car is almost like a part of the family."

Bureau tells of the time when his wife noticed the smell of gas when driving the couple's 1968 Bug. She stopped and found gasoline spewing out of the Bug's fuel pump.

"My wife just took a sock and tied it around the broken pump," Bureau recalled. "She made it home with no problem."