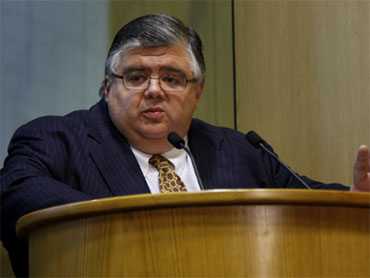 Since the bank began tracking remittances in 1996, it has recorded just one other annual decline - a 3.6 percent decrease in 2008, as the world financial crisis exploded.

Central bank president Agustin Carstens attributed the latest drop to the weak economy in the United States and the increased difficulty Mexicans are having securing employment there. More than 11.8 million Mexicans live in the U.S.

Carstens said a 1.3 percent uptick in remittances in December, compared to the previous month, gave some hope for a recovery.

"It is just one figure, but it could indicate the beginning of a relative stabilization in the drop in remittances, and it would be congruent with the fact that economic activity in the United States is about to go from negative to positive," Carstens said.

An analyst was less optimistic, saying that employment levels in the United States "remain very bad" and remittances to Mexico will probably continue to decline through the first half of 2010 when compared to the same period of 2009.

"It is important to remember that many Mexicans are employed in very volatile sectors that remain depressed, like construction, manufacturing, restaurants," said Hector Rodriguez, a researcher at the Graduate School of Public Policy and Administration in the northern Mexico city of Monterrey.

Experts blame a crackdown on illegal immigration that has stemmed the flow of those heading north to seek work as well as the U.S. recession, in which many Mexicans, especially construction workers, have been laid off.

Mexico receives the largest amount of remittances in Latin America and the third largest in the world, after India and China. The country was also the hardest hit in Latin America by the U.S. economic slump with a drop of about 7 percent in Mexico's GDP.

While remittances represent less than 4 percent of GDP, their decline is being felt in towns across Mexico, where lines at Western Union counters have all but disappeared. New businesses financed by migrant money are no longer opening and construction has stopped on homes that have been built in stages as cash arrived from those working abroad.

In the first part of the decade, Mexico's remittances grew rapidly - from $9 billion in 2001 to $26 billion in 2007 - because of swelling migration and better record-keeping.