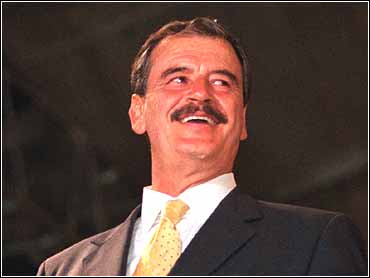 Voters issued a severe judgment on President Vicente Fox's first three years in office, electing another divided Congress in which his party will have fewer seats and increasing the power of the former ruling party and the leftist opposition.

No party gained a majority in Sunday's midterm congressional elections. Voters, frustrated with Fox's inability to deliver on promises of reform, economic growth and a migration accord with the United States, set the stage for three more years of inaction.

In a televised address late Sunday, Fox acknowledged that Mexicans wanted him to work more with Congress.

"This is a mandate for dialogue, restraint and building agreements," he said. "Now comes the time for working together.

"If the citizens didn't vote for a majority, we'll have to build one through cooperation with the political forces and the government. That is the mandate we have received today."

But with two populist parties growing in strength — both of which have steadfastly rejected Fox's main proposals on tax, energy and labor reform — the president faces the prospect of little achievement over the rest of his term.

The PRI claimed the vote as a sort of resurrection for a party that many expected would disappear after losing its seven-decade grip on the presidency in 2000.

"Today it's been confirmed that we are the leading political force," said PRI party leader Roberto Madrazo. "It's also clear that no party can say it represents every Mexican. That fact encourages moderation as a political principle."

With more than half of the votes counted, federal electoral authorities projected the PRI would increase its share of the 500-seat lower house of Congress from 207 seats to between 222 and 227. Fox's party, National Action, was likely to see its number of seats drop from 202 to between 148 and 158.

The biggest gainer appeared to be the leftist Democratic Revolution Party, whose standard-bearer, Mexico City Mayor Andres Manuel Lopez Obrador, has won popularity with handout programs and public works projects. Democratic Revolution tightened its grip on the capital and boosted its congressional seats from 56 to an estimated 93 to 100.

Three smaller parties divided the rest of the vote, and absenteeism was strong, with only 41 percent of the country's eligible voters casting a ballot.

The six gubernatorial races also provided some disappointments for National Action. The party conceded the loss of its stronghold, the wealthy border state of Nuevo Leon, to the PRI, and failed to capture the Pacific coast state of Colima from its rival.

The two parties were running close races in the western border state of Sonora and the Gulf coast state of Campeche, both PRI strongholds.

Among the few bright spots for National Action, state election officials said the party unseated the PRI in San Luis Potosi state and held the governorship in central Queretaro state.

"I think the government and President Fox have to listen to this message, this warning, this signal from the voters," said Jorge Castaneda, who resigned earlier this year from his post as Fox's foreign relations secretary.

Perhaps a better question is whether the opposition parties — long known for their populism and partisan quarreling, and already eager to field potential presidential candidates in 2006 — will listen to Fox.

The PRI promised to cooperate to avoid the kind of gridlock that marked the first half of Fox's term. But together with the other opposition parties, it will almost certainly demand an end to privatization plans and a more nationalist stance on farm and trade questions.

"Now is the time for agreements, and I invite the president and all the political parties to get together and agree on programs to give Mexicans more jobs and greater security," Madrazo said.

Sunday's vote was marred by a few isolated incidents of violence, with two men shot and injured near a polling station in troubled, southern Chiapas state. And a group of radical protesters engaged in scuffles to prevent fellow townspeople from voting in a community on the outskirts of Mexico City.

After Fox's defeat of the long-entrenched PRI, hopes ran high that the new president would deliver on promises ranging from the creation of millions of jobs to a migration accord with the United States.

But the Sept. 11 attacks sidelined a migration accord, and Fox's once-warm relationship with President Bush has cooled amid a growing feeling here that the United States has forgotten Mexico.

Opposition parties depict Fox as catering to the U.S. government in foreign policy and in energy privatizations, and hewing to free trade accords they claim have hurt Mexican farmers.

Fox tried to put the best face on Sunday's vote results, saying the vote confirmed the transition to full democracy.

"Mexicans have once again confirmed the plurality of present-day Mexico," Fox said.