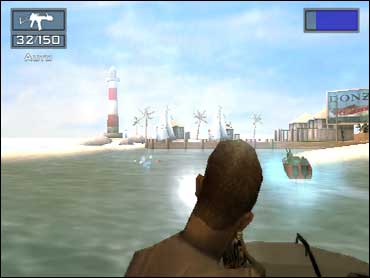 What's best about "Miami Vice: The Game" for PSP is not what it is, but what it isn't.

Unlike Michael Mann's film, it is not a stark take on undercover cops featuring Colin Farrell's '70s porn-star moustache. It isn't a bite of "GTA: Vice City." And, most importantly, it isn't another feebly concocted movie game.

The tendency for movie and video game companies to jointly churn out garbage to make a quick and easy buck is reaching an all-time high — "Pirates of the Caribbean," anyone? — and I was pleasantly surprised to see that this was not the case with "Miami Vice."
2
Rebellion, the game's creator, has done a solid, but not superb, job with this throwback, fluorescent '80s drama.

The game, based on the 2006 movie and not the TV series, puts you in the third-person shoes of either Sonny Crockett or Ricardo Tubbs, two undercover narcotics officers working for the Miami-Dade Police Department. The characters are modeled after Colin Farrell (minus the aforementioned moustache) and Jamie Foxx. Sadly, however, the A-list actors didn't lend their voices to the game, and their B-list replacements didn't do a good job. This, although not a major part of the game, was very disconcerting.

In terms of difficulty, this game is pretty easy. It took me all of 20 minutes to get the hang of it and from there on it was a cinch.

You start the opening level by saving an informant from a vengeful drug dealer. Then you can begin to climb up the drug food chain, gaining street credibility through a reputation system that rewards you for acting like a badass. To determine your reputation rating at the end of each level, the game factors everything from the weapons you used to the clothes you wore (which seems extremely stupid), and the number of first-aid kits you used.
3
Throughout the game you take down cartels dealing in weed, meth and, the '80s favorite, coke. There are a few surprises that go on during cut-scenes, but the storyline isn't going to win any Oscars.

Instead, the game's creators seemed to have focused on the graphics, which are quite good for PSP. The locales you'll visit include a neon-drenched nightclub and a trailer park-turned-meth factory. You even get the quintessential "Miami Vice" experience when you drive a speedboat around a sun-bleached waterfront.

There are some snags, such as the repetitive and unrelenting shouting of enemies, which really makes you want to shoot them, and how the lighting in some levels can make it hard to see enemies or your weapon's laser sight. Overall, however, the graphics are pretty spot on.

A more egregious problem is the game's movement and shooting capabilities. Yes, you're dealing with PSP controls here, but it is heinous that you can't move and shoot at the same time. When lining up a shot you must stop in your tracks, which couldn't be more unrealistic. This is slightly countered by the fact that you can use a cover button to hide behind objects. Otherwise, you'd be bullet-hole-ridden rotting meat in the sweltering Miami sun. Also, the shot placement, which is controlled by the little not-so-analogue nub, is way off. It's unclear if it's the PSP or the game, but it's annoying because you use more bullets than you should have to.

The game's missions are pretty linear and, at times, a little repetitive, but that may be the world of an undercover narcotics agent. I don't really know because I've never been one.

Most missions have you infiltrating a location, killing everyone in sight (in fact, it's close to impossible not to kill everyone), recovering drugs, and completing one or two other added objectives. There is little, if no, backtracking, although dead bodies don't disappear after you leave and re-enter a room.

One feature of the game that makes it easy is that Crockett and Tubbs seem immune to bullets for the first 50 that hit them — even without body armor. Your enemies, on the other hand, drop like flies after only a couple of hits, although a shot to your enemy's gut doesn't do the same thing as one to his head. The former will make him careen in pain, while the latter splatters his brain and he thuds to the ground. Even our narcotics agents develop a slight limp if they've been hit a few too many times.

Some of the mini-games are entertaining, but can be exasperating at times. They allow you to recover encrypted data from a FlashRAM, make drug deals (which is the only way to make money to buy snazzy suits and raise your street cred), and visit drug barons for a sit down.

The FlashRAM mini-game had to be the worst feature, although it allows you to get secret information and unlock weapons. To hack the RAMs you control a triangle that emits shockwaves, which destroy cubes that spit out rings of valuable data. What this has to do with being an undercover narcotics agent is something you'll be trying to figure out days after you finish the game.

The drug-dealing mini-games are much more intriguing and realistic. There are about a dozen drug dealers in the game and each deals a variety of products — weed, PCP, LSD, MDMA, meth and coke. The price for drugs fluctuates from day to day and from dealer to dealer, like a little drug stock market, if you will.

The drug barons run things a bit differently. You can't just go up to them like the dealers. Paying a visit to a drug baron is a two-step process that involves you convincing both his security staff and him that you're on the level, which is played through another mini-game where you use the analogue nub to keep a white line in the blue center of a multicolored bar. The mini-game is a bit contrived, but the tension during these scenes draws you in.

The mini-games can be a nice diversion, but that's all they are.

The ease of "Miami Vice" and a few irritating problem areas keep it from being a good, if not great title. The one redeeming quality is the graphics, which exceptional for PSP.

You won't really feel like an undercover cop playing it, just like some guy sitting in his underwear playing a video game. Rebellion's effort for this movie game was valiant, but the sordid blend of guns, boats and drugs has a distance to go to catch up with "GTA: Vice City."

Click here for some screenshots from the PSP version.

Miami Vice is rated "M" for Mature (Content suitable for ages 17 or older.) and is available for PC, the PS2, Mobile, and Xbox game consoles.
By Milosh Marinovich