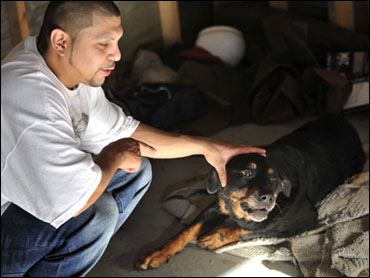 A suburban Detroit man whose Rottweiler was given a new leash on life after surviving a botched euthanasia said he has neither the heart nor the money to try the procedure again.

Redford Township resident Matt Olivarez, 27, said he's in a tough spot: facing possible home foreclosure while at the same time trying to do right by Mia, an 11-year-old pooch that he feeds by hand, partly because of her spinal problem that makes walking difficult.

Olivarez said he took Mia to the Westcott Veterinary Care Center in Detroit on Saturday to alleviate her suffering. He said Westcott officials speculated afterward that the drug dosage wasn't strong enough or had been watered down.

He now shudders at the thought of almost burying his beloved pet alive.

"I don't know if I could do it a second time," Olivarez told The Detroit News for a story published Wednesday.

Olivarez said he returned to his garage Sunday morning and noticed Mia missing from where he'd placed her on a pile of hay the day before. He'd planned to bury her in his grandfather's backyard.

Instead, he turned to find her standing on all fours, staring at him.

"Are you still my dog?" he said, saying he felt like he was living a scene from one of the scary movies he enjoys. "It was like a scene from 'Pet Sematary."'

Olivarez purchased Mia, the only member of her litter to survive, around the time his first child was born. She was intended to be a companion for his sons, now 8 and 9. Olivarez tried to explain Mia's resurrection to them Tuesday night.

Meanwhile, Olivarez is seeking a new owner who can give Mia proper care.

"I'll keep her until I figure something out," he said.