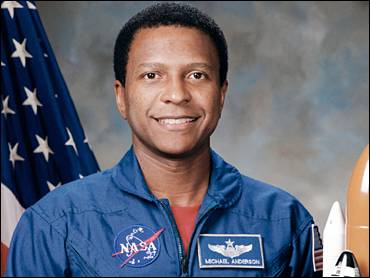 "This job is absolutely fantastic and it's what I've wanted to do since I was a little kid," said payload manager Lt. Col. Michael P. Anderson on Jan. 29, 2003, in an interview from space.

His mother, Barbara says "he was only about 3" when he began talking about being an astronaut.

"He was serious. I used to tell him you are much older than your dad, you know," she says.

"I bought him a little aircraft and he got that and run around on the floor," his father recalls.

Even in grief, Anderson's parents can laugh, remembering the little boy who played with toy rockets and was glued to the TV when Apollo 11 landed on the moon.

"We were getting ready to go to the mall and we couldn't go until that happened," his mother tells Kauffman. "He had to see that."

The TV images absorbed by the little boy set him on his course.

"He told me some years ago the word 'can't' should be taken out of the dictionary because there isn't anything that can't be done," says his mother.

Anderson never veered from the dream and in 1998 he traveled to outer space on the shuttle Endeavor.

"He was overjoyed and tried to describe the magnificence of the whole thing," recalls his mother.

Anderson brought his high school pennant on board Endeavor, and returned to his old school to meet with students and say thanks to early mentors like his science teacher Hal Sautter.

At Cheney High School and throughout Spokane, flags fly at half-staff and in churches throughout the city Michael Anderson is remembered.

Anderson died while living his dream, his parents say, and it's a dream that should continue for others. The space program, they say, should not be pulled back.

"It would be a disappointment to them if it didn't go forward because they would feel like that sacrifice was for nothing then," says his mother.

Michael Anderson leaves behind a wife, two children and a mom and dad who say they are grateful to have been his parents.

"His life wasn't in vain and it will do some good to mankind in the future and in years to come. I'm proud to have had a son that contributed to his country, his community and to the world," says his mother.