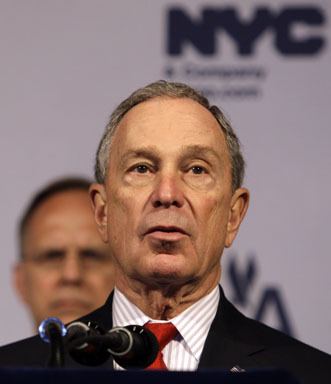 New York Mayor Michael Bloomberg said yesterday at a conference that there's no chance an independent presidential candidate could win in 2012 -- effectively batting down continued rumors that the independent mayor is planning his own presidential bid.

Speaking at an event hosted by the Wall Street Journal, Bloomberg said that given the entrenched two-party system in place, an independent candidate would not be able to get a majority of the 538 Electoral College votes, Bloomberg News reports.

"Unless you get a majority, it goes to the House," Bloomberg said, explaining the rules for a split vote, as written in the Constitution. "It's going to go to the Republicans because the Republicans have just taken over the House."

Bloomberg is often held up as a possible 2012 contender, but he has repeatedly denied he will run.

The mayor did not give a comment to the Huffington Post, but Fineman reported that he continues to monitor the possibility. An unnamed source said of Bloomberg, "If the data ever show that he could somehow get 270 electoral votes, he'll be in it in a New York minute."

Scarborough told Fineman, "We haven't discussed it directly," adding, "Have people discussed it in his sphere and in my sphere? I think so."

The MSNBC host, a former Republican congressman, gave a more forceful rejection of the idea on his talk show this morning: "Mike Bloomberg and I have not talked about this directly, or indirectly or super, super, secretive directly."

Fineman contends the political atmosphere in the coming years could create the right conditions for Bloomberg to have a legitimate shot: "The already-bitter partisan divide in Congress has to widen; the Republican Party has to become a subsidiary of the tea party; the Democrats must become a rump parliament of liberals; the tone of politics must get even nastier, Jon Stewart notwithstanding; and the economy has to remain enfeebled," he writes. "It doesn't take a political rocket scientist to see that this isn't a far-fetched scenario."

"Party affiliation is so strong with enough people that the Republicans and Democrats -- no matter who their candidates were, no matter who voted -- would get enough votes that you could get every independent vote, it would still not be a majority," he said at the Wall Street Journal event.