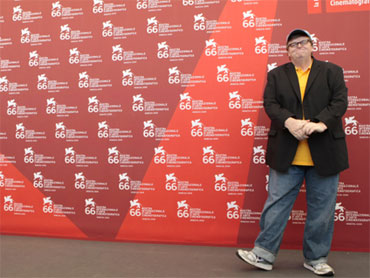 (AP Photo/Andrew Medichini)
Filmmaker Michael Moore told activists and reporters Tuesday that liberal voters will get behind Republicans who support health care reform if Democrats let them down, according to reports.

"You think we're behind you just because you're Democrats?" Moore said at the Washington headquarters of the government watchdog group Public Citizen, the Hill reports. "We'll find Republicans who are smart enough to realize that the majority of Americans want universal healthcare."

Moore said that he and an "overwhelming majority of Americans" believe that at "minimum," a health care bill must include a government-sponsored health insurance plan (referred to as a "public option"), the Hill reports.

Also on Tuesday, the Senate Finance Committee -- one of five congressional committees responsible for health care reform -- rejected two attempts to include a public option in its reform bill.

"To the Democrats in Congress who don't quite get it: I want to offer a personal pledge. I – and a lot of other people – have every intention of removing you from Congress in the next election if you stand in the way of health care legislation that the people want," Moore said, according to Politico. "That is not a hollow or idle threat. We will come to your district and we will work against you, first in the primary and, if we have to, in the general election."

The filmmaker extended his warning to President Obama, the Hill reports.

Moore is promoting his new documentary, "Capitalism: A Love Story," which is about the collapse of the financial industry.

Just as the health care debate could prove to be a liability for moderate Democrats, Moore said, the financial crisis puts at risk the seat of Sen. Chris Dodd (D-Conn.), the chair of Senate Banking Committee, who is up for re-election in 2010.