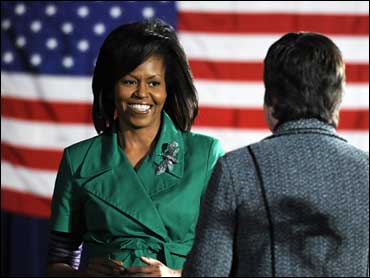 First Lady Michelle Obama will head to Copenhagen, Denmark on October 2nd to press for Chicago to be chosen to host the 2016 Summer Olympic and Paralympic Games, the White House announced Friday.

Chicago is one of four cities now competing for the games, along with Madrid, Rio de Janeiro and Tokyo. The International Olympic Committee will select the host city in Copenhagen.

The White House said President Obama today told IOC President Count Jacques Rogge that he himself could not represent the United States because "the fight to pass health insurance reform keeps him from committing at this time to travel to Copenhagen on October 2."

The president's presence would likely be a boon to the Chicago bid, as the participation of world leaders has helped candidate cities in the past. Former British Prime Minister Tony Blair traveled to Singapore to help London won the 2012 Games.

The Associated Press reports that Mr. Obama has videotaped four messages for members of the IOC in the past few months. Rogge told the wire service that the presence of world leaders is not required.

"If they want to come, this is an honor for the IOC," he said. "We'll feel honored by their presence. It would be absolutely legitimate if they go to defend the bid of their country. We are not asking for heads of state to come there."
The first lady will be accompanied in Copenhagen by senior presidential adviser Valerie Jarrett.

"One of the great honors I have as First Lady is to represent America around the world and it is with great pride that I will go to Copenhagen to make the case for the United States to host the 2016 Olympics," Mrs. Obama said in the release. "There is no doubt in my mind that Chicago would offer the world a fantastic setting for these historic games and I hope that the Olympic torch will have the chance to burn brightly in my hometown."

The White House release goes on to make the case for Chicago as the host city, lauding its "diverse communities and vibrant neighborhoods, paired with a scenic waterfront, soaring architecture, and innovative technologies and infrastructure."

Next Wednesday, the president and first lady will host a White House event to promote the Chicago bid. It will be attended by Olympic and Paralympic athletes and participants will stress the importance of healthy living and athletic activities on the part of children.