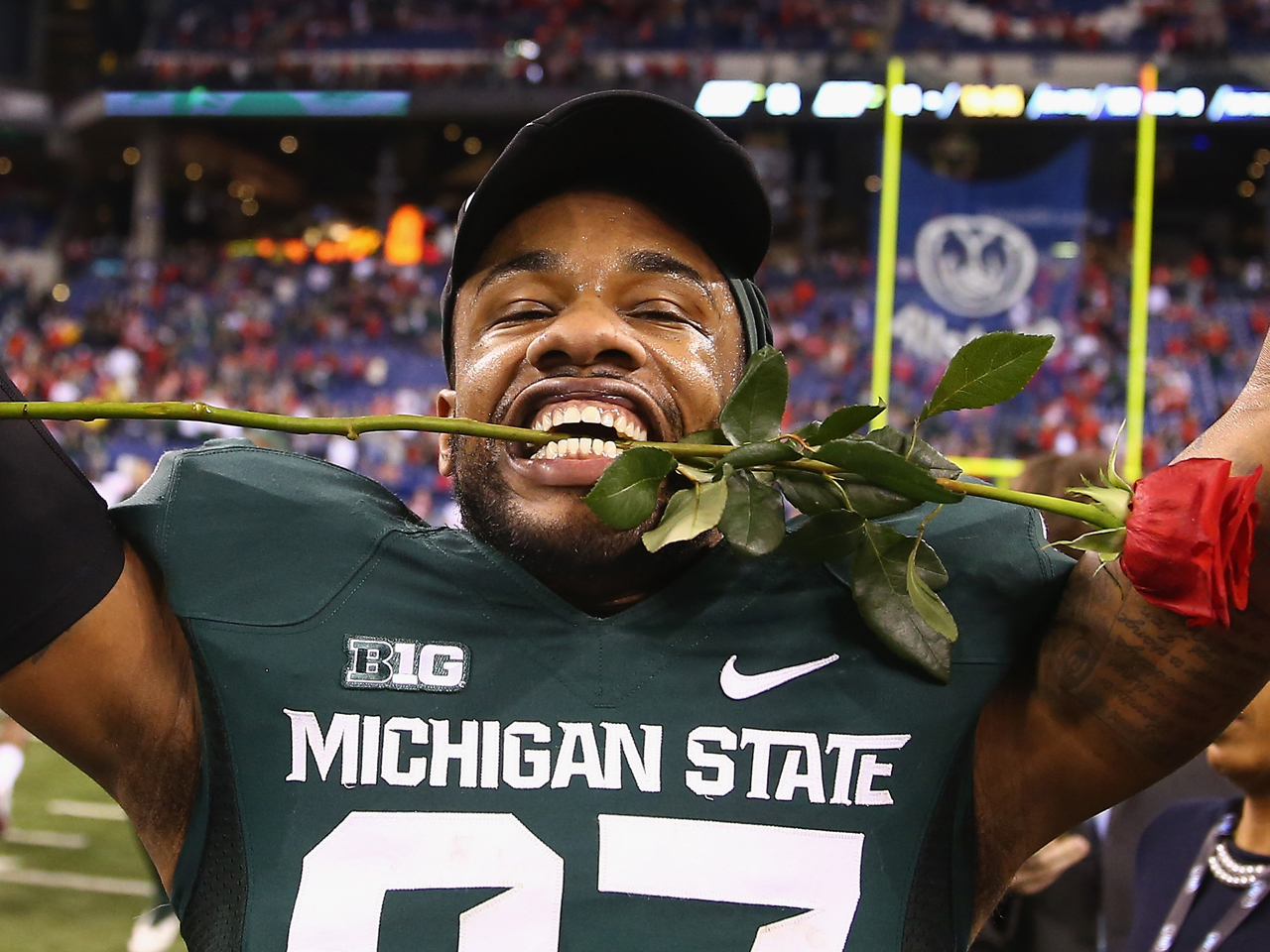 INDIANAPOLIS - Urban Meyer started Saturday by whooping it up with his players on the sideline.

He ended it by rubbing his eyes and carefully examining a stat sheet that explained why No. 2 Ohio State would not be playing for the national championship.

After Ohio State took its only lead late in the third quarter, the Buckeyes' defense gave up 17 straight points, the offense couldn't convert on third or fourth-down and No. 10 Michigan State pulled off a 34-24 upset that shook up the BCS world yet again.

"I really wanted these guys to experience something special, and we are," Meyer said. "I imagine there's a chance we'll get invited to a great bowl game, and if we do, they're going to get a very good Buckeye football team that's going to stick together and try to win a game. If you're asking me to measure the levels of hurt, I'm not sure I can do that."

There were all sorts of unusual problems Saturday night.

Ohio State's tough run defense allowed its first 100-yard runner of the season. The offense scored just half of its 48.2 point average and converted just 1 of 10 third-down chances, and facing fourth-and-2 late in the fourth quarter, Braxton Miller, picked up only one yard.

It was a crushing blow after going 24-0 under Meyer and playing their way back from probation into national championship contention.

Now the Buckeyes (12-1) will have to settle for something short of their fourth BCS title game.

"It's going to haunt all of us, I imagine, for a little while," Meyer said. "But that's part of the game."

The Buckeyes' loss could haunt the Big Ten, too.

While the Spartans (12-1) are still likely to book their first Rose Bowl trip since the 1987 season, something they may have done even with a loss, Michigan State's victory put Auburn, who the Buckeyes were rooting for last week against Alabama, in the title game against Florida State.

It was a game that almost defied logic.

Ohio State came into the game with the nation's longest winning streak (24), had not lost under Meyer in two seasons and had one of the nation's most productive offenses and underrated defenses.

Michigan State turned the conventional wisdom upside down by scoring the first 17 points. Then the nation's stingiest defense gave up the next 24 points as Miller, Carlos Hyde & Co. took command.

Sophomore quarterback Connor Cook responded to the challenge by driving the Spartans for a field goal, hooking up with the wide open Josiah Price in the flat of the end zone and then burned 3½ critical minutes on the clinching drive, capped by Jeremy Langford's sealing 26-yard TD run.

Cook finished 24 of 40 for a career-high 304 yards and three scores. Langford ran 24 times for 128 yards, becoming the first player this season to top 100 yards against the Buckeyes this season.

For Michigan State, it was a milestone night. It won its 12th game for the first time in school history, completed a perfect conference season and extended its own winning streak to nine - something it had not done since starting 1966 at 9-0.

Most important, the players got to hold the roses for the first time since 1987 and the celebration began even before the final seconds ticked off the clock.

"We're going to live this one for a while, live it for a month," coach Mark Dantonio said. "But it's important that we finish what we started and that will end with a bowl game."

Miller did what he could to rally the Buckeyes, finishing 8 of 21 for 101 yards with one touchdown pass. He also ran 21 times for 142 yards and two scores, while Carlos Hyde ran 18 times for 118 yards. Both joined the Buckeyes' 3,000-yard club, becoming the seventh and eight players of the school's exclusive group.

Starting right guard Marcus Hall, who Meyer said would not start after last week's fight at Michigan, did not play. Meyer said he made that decision earlier this week.

But it was the stinging loss that really hurt.

"Things happen in games, don't really go your way," Miller said. "You've got to come back and fix the mistakes."

The Buckeyes did that late in the first half when they closed to 17-10 at halftime. Miller opened the second half with an 8-yard TD run to tie and then gave Ohio State the 24-17 lead with a 6-yard run with 5:36 left in the third.

Michigan State answered with Michael Geiger's 44-yard field goal, which barely dropped over the crossbar, to make it 24-20 and Cook hooked up with a wide-open Price in the flat to make it 27-24 before Langford sealed it with his TD run with 2:16 left, which prompted Dantonio to lobby for the Spartans to be playing in the title game Jan. 6.