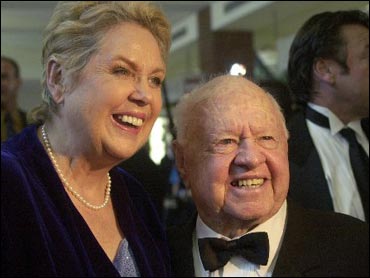 (CBS/AP) Legendary star Mickey Rooney is in the news but not for reasons related to his acting work.

The actor has obtained a temporary restraining order against his stepson, who is accused in court documents of abusing the actor and meddling in his finances.

Attorneys for Rooney obtained a restraining order on Monday requiring stepson Chris Aber to stay 100 yards award from the 90-year-old and his home.

Court documents state Aber has prevented Rooney from leaving the house, forced the actor to sign documents without reading them and has been withholding food and medicine.

The filing describes Aber as making Rooney a "prisoner in his own home."

The BBC reports that Aber is the son of Rooney's eighth  and current wife, Jan Chamberlin. Rooney and Chamberlain were married in 1978.

Attempts to locate a working phone number for Aber were unsuccessful.