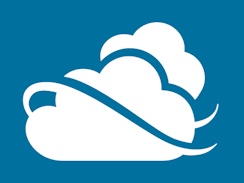 (MoneyWatch) COMMENTARY Online storage service SkyDrive has been around for a number of years, but as a second-tier Windows Live product it has gotten little love or promotion from Microsoft (MSFT). Consequently, the far more capable Dropbox hosting service became the favorite among tech trendsetters and small business alike. Until now: SkyDrive has just leapfrogged most other Internet cloud services and unreservedly deserves your attention.

First and foremost, Microsoft has released desktop clients for both Windows and Mac OS, which integrates SkyDrive's gigabytes of online storage into your operating system. In Windows, open Windows Explorer and your SkyDrive files are a click away. Save a file to your PC's SkyDrive folder and it's immediately synchronized with the cloud. Just like Dropbox. You can install the desktop apps from the SkyDrive home page.

And then there's the enhanced SkyDrive app for iOS -- it elegantly and seamlessly lets you access files from your phone or iPad. The only major operating systems that SkyDrive doesn't yet support are Linux and Android -- serious oversights, to be sure, given the proliferation of  but SkyDrive is certainly feeling like a cross-platform solution.

Traditionally, SkyDrive offered 25GB, which was quite a bit of storage space, but it came with a lot of strings. No single file could be larger than 100MB, and if you hit the 25GB ceiling you were out of luck, since there was no upgrade policy. In this regard, Microsoft both gives and takes away. New users, for example, are now limited to just 7GB for free. But if you are an existing SkyDrive user, rush over to your SkyDrive page and click to upgrade your account from 7GB back to the full 25GB (before this offer expires).

On the plus side, the file limitation is now a massive 2GB, so SkyDrive is useful for sharing large files. And if you need more than your free allotment of space, Microsoft now lets you add 20GB for $10 a year, or as much as 100GB for $50 a year. Check out the upgrade page for all pricing details.

This is the upgrade I've been waiting for. SkyDrive now fully integrates into the Windows and Mac file systems, so you're no longer limited to uploading files through Web forms. And few other cloud services can compete with SkyDrive on sheer storage space. SkyDrive is now the service to beat.