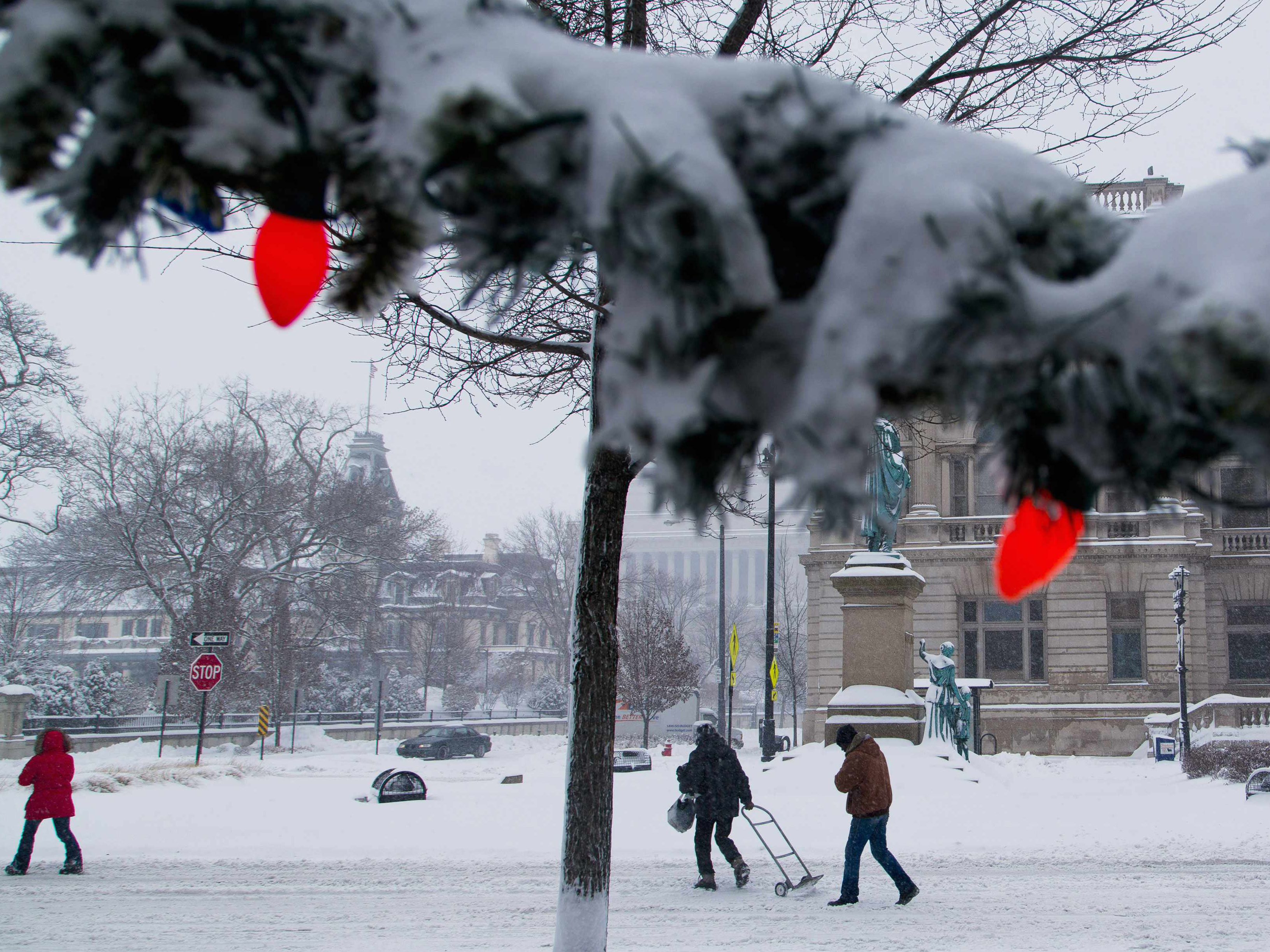 CONCORD, N.H. - The first full day of winter brought a wild mix of weather across the U.S. on Sunday: ice and high wind in the Great Lakes and New England areas, flooding in the South, snow in the Midwest and record-shattering temperatures in the 60s and 70s along the mid-Atlantic.

Snow and ice knocked out power to 400,000 homes and businesses in Michigan, upstate New York and northern New England, and also left more than 400,000 people without electricity in eastern Canada. It could be days before the lights are back on everywhere.

As of mid-afternoon, more than 500 airline flights had been canceled and about 3,800 delayed, according to aviation tracking website FlightAware.com.

The icy weather was expected to make roads hazardous through at least Monday from the upper Midwest to northern New England during one of the busiest travel times of the year.

High-temperature records for the date fell for the second straight day in the mid-Atlantic states because of a mass of hot, muggy air from the South.

In New York's Central Park, the mercury reached 70 degrees, easily eclipsing the previous high of 63 from 1998.

It was so warm at the Rockefeller Center skating rink that squeegee men had to follow skaters around to keep water from pooling.

"It is fantastic. We never expected this we are so lucky. This is the best," Eric from Virginia told CBS Radio station 1010 WINS.

Temperatures were expected to return to normal by Monday night and Tuesday, dropping back into the 30s.

The scene was much more seasonal Sunday in Vermont, where Lynne White of West Charleston listened to the cracking of falling tree branches and gazed at the coating of ice on her home.

"It's not easy today," Jeff Miller, a mail carrier pushing through the snow to deliver packages for the U.S. Postal Service, told CBS affiliate WDJT in Milwaukee.

"There's a lot of black ice around here, especially with the weather the last couple of days," Miller said. "You almost gotta walk like a penguin. Take real short steps."

Ice and snow in Oklahoma were blamed for three traffic deaths on slick roads.

In New York's St. Lawrence County, almost 2 inches of ice had accumulated by early Sunday, coating tree limbs and power lines, and a state of emergency was declared to keep the roads clear of motorists.

"It's a big party weekend ... before Christmas," county dispatch operations supervisor Jim Chestnut said. "This put a little bit of a damper onto that."

Despite a glaze of freezing rain in Maine, plenty of shoppers ventured to the outlet malls in Kittery on the last weekend before Christmas.

In Kentucky, three bodies were pulled from Rolling Fork River on Sunday after their vehicle was swept away by floodwaters, and a fourth person drowned in Carroll County after a four-wheeler overturned in high water.