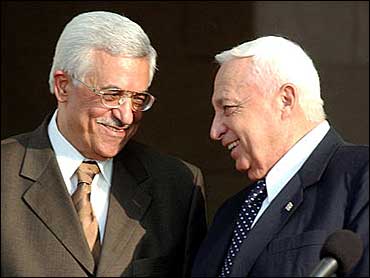 Israeli and Palestinian premiers met in Jerusalem on Tuesday to discuss peace moves, as armored vehicles and trucks loaded with military gear drove out of bases near Bethlehem ahead of a planned withdrawal from the West Bank town.

Leaving Ramallah on his way to Jerusalem for the summit, Palestinian Prime Minister Mahmoud Abbas said he would bring up release of Palestinian prisoners, allowing freedom of movement for Yasser Arafat and setting up committees to deal with issues like security and finances.

Israeli Prime Minister Ariel Sharon has asked the Shin Bet security service to prepare a list of Palestinian prisoners who could be released, but has said those involved in killings would not be set free.

The Bethlehem pullout was to begin Wednesday, in line with the U.S.-backed "road map," which requires Israel to withdraw to positions it held before the outbreak of fighting in September 2000. Over the weekend, Israel pulled back from parts of the Gaza Strip, while Palestinian militias declared a suspension of attacks on Israelis.

Despite the three-month truce, a Palestinian man opened fire at a West Bank checkpoint Tuesday and was killed by troops. There was no claim of responsibility, but renegade groups in one of the militias, the Al Aqsa Martyrs' Brigades, linked to the ruling Fatah movement, have said they will not observe the truce. On Monday, Al Aqsa gunmen killed a Bulgarian construction worker in the West Bank.

Arafat said Tuesday that the killers of the Bulgarian worker had been arrested, a claim denied by Palestinian security forces. An arrest would mark a change in Palestinian policy, reports CBS News Correspondent Robert Berger, but could also demonstrate that Arafat remains a key player.

Security officials from both sides have agreed on the details of the Bethlehem pullout, but the chief of Shin Bet said Tuesday that Israel would only withdraw from additional West Bank towns if Palestinian police begin disarming Hamas, Islamic Jihad and the other militias in the Gaza Strip.

"The real test (in Gaza) will be in two or three weeks, when they have to deal with disarming the terrorist organizations," the Shin Bet chief, Avi Dichter, told a symposium at Tel Aviv University. "We will not move on to transfer responsibility for the West Bank before it becomes totally clear that in Gaza the process of disarming terror groups has begun."

Abbas opposes the use of force against militias. He suggested Tuesday that illegal weapons would not be confiscated, but that Palestinian police would try to persuade militiamen not to use them. "The misuse of weapons must be prevented through dialogue and agreement, not through internal war," Abbas told the Palestinian parliament.

Abbas lacks the wide popular support he feels is necessary to disarm the militants, and his security service has been weakened during the 33 months of fighting.

Even if Abbas does not move to disarm the militant groups who have called the cease-fire, he may face trouble from those who have not. Renegade offshoots have said they would not join the declaration. The offshoots include the radical Damascus-based Popular Front for the Liberation of Palestine-General Command.

Abbas will also ask Sharon to halt construction of a massive security barrier through the West Bank meant to keep out Palestinian attackers.

U.S. national security adviser Condoleezza Rice has told Israeli officials the United States opposes the construction of the barrier, which critics say unilaterally draws the border for a future Palestinian state, without waiting for a peace deal.

Near Bethlehem, there were first signs that Israeli troops are preparing to withdraw. Israeli and Palestinian commanders met to wrap up the final details. Trucks loaded with boxes and containers drove out of an army base on the outskirts of town. Flatbed trucks transporting armored vehicles pulled out of another base.

In the Gaza Strip, the pullback has gone smoothly, and Palestinian police have taken over positions left by Israeli forces. Traffic flowed freely on the main north-south road, which until Monday had been dotted by Israeli checkpoints.

While there was optimism in Gaza about the pullbacks, there was little joy. The Los Angeles Times reports that Palestinians returning to areas occupied by Israeli troops have found homes and orchards flattened — because, the Israelis say, they needed to eliminate cover for snipers.

In some places, Israeli troops only pulled back a few yards before erecting new fortifications, The New York Times reports.

In other developments Tuesday, Israeli wrecking crews demolished the foundations of a mosque that was being built without authorization next to a major Christian shrine, the Basilica of the Annunciation in Nazareth, Jesus' boyhood town.

The demolition came after years of wrangling and amid intense Christian pressure, including from the Vatican.

In Jerusalem, police said Tuesday they have allowed non-Muslims to resume tours of the Al Aqsa Mosque compound, Islam's third holiest shrine, which had been closed to visitors since the outbreak of fighting.

The events in Nazareth and Jerusalem angered Muslim leaders.

"This is barbaric behavior, the destruction of a mosque," said Salman Abu Ahmed, leader of the Islamic Movement in Nazareth, Jesus' boyhood town. Police sealed the center of Nazareth, and hundreds of officers guarded three bulldozers.

A Sept. 28, 2000 visit by then-opposition leader Sharon to the shrine, meant to underline Israel's claim to sovereignty, triggered deadly riots that escalated into the Palestinian uprising. Jews also revere the area as the site of their biblical temples.