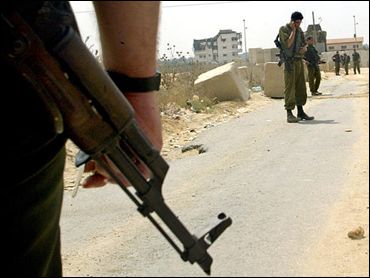 Several Palestinian militant groups announced the suspension of attacks against Israelis on Sunday, and Israel pulled troops out of northern Gaza later in the day.

Despite the truce, there were two armed attacks Monday on Israelis, one of them deadly — a reminder of how elusive any lasting peace might me.

White House spokesman Ari Fleischer said, "the president is hopeful but he's realistic. The Middle East is an area where on a good day they take two steps forward, one step backward."

"They always say our life will get more better, but they make it more miserable," Muna Nijem told Hawkins.

They've seen these cease fires before and Hatem Kawasme says they "have to be optimistic" and they "don't see a lot of hope."

Making the rounds of the morning talk shows, Secretary of State Colin Powell said Monday that the Palestinian people should "invest their future" in the leadership of Prime Minister Mahmoud Abbas and shun terrorist groups.

"We want the terrorists disarmed, and Prime Minister Abbas recognizes that he cannot be the prime minister of a Palestinian state based on democratic principles" if terrorist groups continue to thwart the peace process, he said.

On Sunday, the three major Palestinian factions announced a truce. The Islamic militant groups Hamas and Islamic Jihad agreed to lay down arms for three months, while Fatah announced a six-month cease-fire.

Both Israel and the United States want the militant groups dismantled, but Abbas says he lacks the popular support to do so.

Israel reacted coldly to the truce announcements, which were accompanied by a number of demands, including a prisoner release and a halt to Israeli military strikes. They were not presented as preconditions.

Israel has refused to make blanket promises but pledged to halt targeted attacks of wanted Palestinians in areas now controlled by Palestinian police.

Two new ingredients raised hope for the current cease-fire effort: Both sides, exhausted by the carnage, are grateful for the break in fighting; and the United States is intensively engaged in supervising implementation of the so-called "road map" to Mideast peace and Palestinian statehood by 2005.

Appearing on the CBS News Early Show Powell noted that he and national security adviser Condoleeza Rice have visited the region in the past two weeks and said the Bush administration will work closely with the Israelis and Palestinians to see through implementation of the "road map" to peace.

Powell, asked on ABC if recent developments were encouraging, replied, "I think we should be optimistic."

The two largest Israeli dailies, Yediot Ahronot and Maariv, framed their front-pages in blue, normally reserved for editions on Jewish holidays. "Cease-fire," read a banner headline in the Maariv daily, above a photo of soldiers hugging in Gaza. Yediot had soldiers posing on a tank with an Israeli flag.

The withdrawal scenes were reminiscent of the mid-1990s, when Israeli troops pulled out of Palestinian population centers under interim peace deals. Since fighting erupted in September 2000, Israel has reoccupied most of those areas; 2,414 people have been killed on the Palestinian side and 807 on the Israeli side.

As the last tanks pulled out of Beit Hanoun in northern Gaza, two young boys emerged from a house and planted a Palestinian flag in the sand.

"I hope that this will be the last time we see them as invaders," said Rafet Jamal, 45, watching from a balcony with his 12-year-old son.

Later in the morning, Israel dismantled checkpoints along the main north-south roads, which had been a major cause of hardship. Palestinian motorists trying to get from one end of Gaza to the other had often waited for hours at the barriers.

A Bulgarian truck driver was killed in a shooting attack in the West Bank, mistaken for an Israeli. The Al Aqsa Martyrs Brigade, linked to Yasser Arafat's Fatah movement, claimed responsibility for Monday's shooting. The militia consists of bands of gunmen who do not recognize a central authority.

Three hours later, Palestinians opened fire on workers building a security fence near the West Bank town of Qalqiliya, the military said. No one was hurt, and soldiers returned fire.

Prime Minister Ariel Sharon shrugged off calls to react to the shootings and called for patience.

"Even if the Palestinians were the fastest in the world and the most determined, you can't expect them to destroy terrorism in a moment, since this morning," Sharon told members of parliament.

Yet the people are still doubtful peace will prevail. Liat Yitzhak told Hawkins that he feels "it's just a whole lot of talking — just talking and promises they never will keep."

There are miles to go along the road to peace before Israelis and Palestinians will let themselves believe that they'll ever get there.