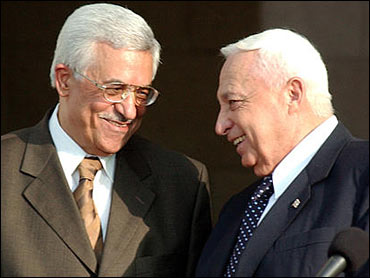 Standing side by side, the Israeli and Palestinian prime ministers rededicated themselves Tuesday to peace efforts and spoke of a shared future for their peoples, using conciliatory language not heard here in three years.

Ariel Sharon and Mahmoud Abbas declared their readiness to "put the past behind us" as they met for the third time in six weeks to plan their next moves on the U.S.-backed "road map" to peace.

At the outdoor ceremony in front of Sharon's office, the Israeli defense minister and the Palestinian security chief — bitter enemies not so long ago — sat next to each other and chatted amicably.

The summit came during a week of important peace strides: Three main Palestinian militant groups declared a temporary halt in attacks on Israelis and Israeli forces handed over security control in parts of the Gaza Strip to Palestinians.

In the West Bank, Israeli troops prepared to pull out of the Palestinian town of Bethlehem — giving further momentum to efforts to implement the plan to end 33 months of violence and establish a Palestinian state by 2005.

Both prime ministers committed themselves Tuesday to the peace effort launched by President Bush at a June 4 summit.

"Even if we are required to make painful compromises, I will be willing to make them for the sake of true peace — a peace for generations, the peace that we all yearn for," Sharon said.

Abbas, who stood behind his lectern alongside Sharon, responded by declaring it's time to "put the past behind us."

"Enough suffering, enough death, enough pain. Let us stride forward with courage and without hesitation to the future we all deserve," he said.

The two leaders, joined by senior Cabinet ministers and aides, then withdrew for two hours of talks aimed at resolving disputes over their next moves, including the pace of an Israeli troop withdrawal from West Bank towns and the scope of an expected release of Palestinian security prisoners.

The premiers agreed to reactivate committees set up during the first years of peace efforts in the 1990s to discuss issues including security, prisoners and legal matters, according to officials on both sides. The committees were suspended during the current violence.

Abbas also asked for freedom of movement for Palestinian leader Yasser Arafat, who has been confined to his West Bank headquarters by Israel for more than a year. Sharon said he would consider allowing Arafat to move to Gaza, but a senior Israeli official, speaking on condition of anonymity, said it would be a "one-way ticket."

In Washington, the Bush administration said it was pleased with Abbas' performance and was considering resuming direct aid to the Palestinian Authority — with a big boost to help strengthen its security forces.

"We've made no decision about what level of potential increase in funds there would be," White House spokesman Ari Fleischer said Tuesday. "But the very fact we are involved in these discussions directly with the Palestinian Authority is a hopeful sign."

Israeli and Palestinian commanders met Tuesday to wrap up final details of the pullback from Bethlehem, expected to begin overnight or on Wednesday. Flatbed trucks loaded with armored vehicles and containers pulled out of two Israeli bases on the outskirts of town.

Under the road map peace plan, Israel must gradually withdraw to positions it held before the outbreak of fighting in September 2000
when the Palestinian autonomy government controlled two-thirds of Gaza and about 40 percent of the West Bank, including all its Palestinian cities.

CBS News Correspondent David Hawkins reports that Israelis say the real test of the tenuous new relationship will come when Palestinian militant groups make the decision whether or not they will disarm.

In a later stage, Israel is to make further withdrawals and the autonomy is to be transformed into an independent state.

"We hope that they will continue with implementation of the road map plan, which means complete withdrawal from all Palestinian lands," Arafat told reporters at his compound in Ramallah.

However, the chief of Israel's Shin Bet security service said Tuesday that Israel would withdraw from additional West Bank towns only if Palestinian police begin disarming Hamas, Islamic Jihad and other violent groups in the Gaza Strip.

"We will not move on to transfer responsibility for the West Bank before it becomes totally clear that in Gaza the process of disarming terror groups has begun," Avi Dichter told a symposium at Tel Aviv University.

Abbas opposes the use of force against militants, fearing it could trigger a civil war. He suggested Tuesday that illegal weapons would not be confiscated, but that Palestinian police would try to persuade militiamen not to use them.

"The misuse of weapons must be prevented through dialogue and agreement, not through internal war," Abbas said in an address to the Palestinian parliament.

Israeli officials said Sharon insisted in his talks with Abbas that violent groups be dismantled, in line with the road map. "There can be no peace with terrorism," Sharon said in his opening address.

Despite the truce announcement, a Palestinian man opened fire at a West Bank checkpoint Tuesday and was killed by troops. There was no claim of responsibility.

Arafat's Fatah faction has suspended attacks for six months, while Islamic Jihad and Hamas declared a three-month truce. But renegade groups in the Al Aqsa Martyrs' Brigades, a militia linked to Fatah, have said they will not observe the cease-fire.

On Monday, Al Aqsa gunmen killed a Bulgarian construction worker in the West Bank. Arafat said Tuesday the man's killers had been arrested, a claim denied by Palestinian security forces.