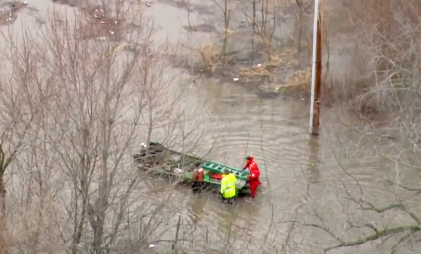 ELKHART, Ind. -- Shelters were open to assist people forced from their homes Thursday by flooding in Indiana and Michigan, as rivers swollen by heavy rain and melting snow continue to rise in the Midwest. Flood warnings were in effect across a wide swath of the central and southern U.S., from Wisconsin, Illinois and Ohio to Texas and Louisiana.

The American Red Cross said it has opened eight shelters in northern Indiana, where crews used boats to help residents evacuate their homes.

Local officials declared a state of emergency in three local cities and asked that traffic be limited to first responders and emergency personnel. Indiana University-South Bend canceled Thursday classes, and residents of a student apartment complex surrounded by water were encouraged to leave.

"I ended up grabbing my favorite blanket and stuffed animals," 15-year-old Madison Schmidt, who was evacuated from her home in Elkhart to a shelter at a church, told The Elkhart Truth newspaper. "I got into the boat. Seeing what happened, just almost made me cry."

Record-high flooding along the St. Joseph River closed down a wastewater treatment plant for several hours in South Bend, a city of about 100,000 residents. It later restarted at limited capacity. The National Weather Service reported the river was expected to stay above its major flood stage until Tuesday.

"This remains major flooding and it's going to be that for a while as water from the whole county continues draining into the river, even though the rains are mostly behind us," South Bend Mayor Pete Buttigieg said.

Officials haven't yet estimated the extent of building damage, which is concentrated in low-lying areas.

Further west, in Lake Station, at least 25 homes have followed officials' recommendation to evacuate. Firefighters in the town of 12,000 people went door-to-door Wednesday asking people to leave their homes until flooding receded, CBS Chicago reports. Some, however, refused to leave.

Olivia Romero went to work Wednesday morning thinking her home was in good shape, but when she came back, the water was lapping at her door. The mother of two then decided it was time to go.

"A six-month-old baby, so that's why we're just going to shelter at my cousin's house," she said. "I'm happy that she's offered to help. Like I said, we'll worry about material things later. Right now it's just safety."

Other parts of the Midwest were under winter weather advisories on Thursday, with Kansas school districts and universities canceling classes and many state employees being told to stay home.

In Michigan, states of emergency were declared in the Lansing area as officials recommended the evacuations of several neighborhoods. City officials said anyone living in the possible flood areas should temporarily leave their home by midday Thursday.

"While the rain has stopped, we are expecting significant flooding," Lansing Mayor Andy Schor said.

Flooding also hit nearby Michigan State University, where some roads, parking lots and athletic fields were covered by water from the Red Cedar River that runs through its East Lansing campus. Classes in several buildings have been relocated and the school put up sand-filled barriers in an attempt to curb flooding.

"Be careful if you're trying to come to campus," Schor said Wednesday, noting the river was at its highest levels since 1975. "Changing conditions are affecting not only the roads but sidewalks and walkways."

The storm system started pushing heavy rain, snow and ice into the region earlier this week, affecting roads and other low-lying areas. The weather was been blamed for hundreds of car crashes and several deaths, including a crash that killed four people along a slippery interstate in Nebraska.

In central Michigan's Fairplain Township, a 1-year-old girl was found dead Wednesday in standing water from rains and snowmelt in her backyard. In Oklahoma, authorities said a 53-year-old man drowned when he drove onto a flooded bridge near Stilwell and was swept off the roadway.

In Illinois, authorities issued an evacuation order Wednesday for residents in Marseilles who live near the Illinois River. Fear of the rising river also prompted the evacuation of a nursing home in Ottawa. Two days of rain in southern Wisconsin also swelled waterways, leading to a handful of high-water rescues.