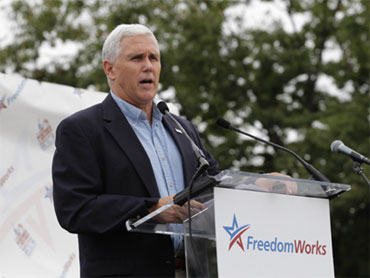 Speculation about a possible Mike Pence run for president won't be settled until after the new year.

The Indiana GOP representative visited the Detroit Economic Club in Birmingham, Mich., on Monday and said he and his family are "determined to take the next few months and pray about" a possible run for the White House in 2012, according to the Associated Press.

Indiana voters re-elected Pence earlier this month to the congressional seat that he's held for more than 10 years in Indiana's sixth district. But upon winning the seat, he announced he would step down as chairman of the House Republican Conference - which sparked rumors about a possible 2012 run.

Pence was the surprise winner in an early presidential straw poll at the annual Values Voter Summit in September. And there's also a Mike Pence for President Facebook page started by one of his supporters that is gaining some attention (the page is not connected to the congressman).

Bolton told Aaron Klein, a conservative radio host on WABC in New York, on Sunday that he is considering a run for president in 2012.

"If I did run, and I haven't made a decision," Bolton said, according to CNN. "I have never run for office one way or the other, so it would be a pretty big decision to do it."