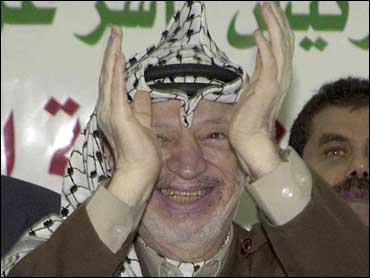 Palestinian militants beat and detained the Palestinian governor of a West Bank town Saturday, accusing him of being an Israeli collaborator. He was released after five hours, a militant leader said.

The Al Aqsa Martyrs' Brigades seized Haider Irsheid and took him to a refugee camp next to the town of Jenin. Al Aqsa's Jenin leader, Zakariye Zubeydi, demanded the Palestinian Authority put Irsheid on trial. Witnesses said Irsheid suffered bruises on his face and neck.

The militants accused the governor of trying to crack down on their group, reports CBS News Correspondent Robert Berger. The U.S.-backed peace "roadmap" demands a crackdown on terror groups, but Palestinian officials fear that could lead to civil war.

The abduction came as Israel and the Palestinians struggled to maintain a temporary cease-fire declared by the main militant groups and to push ahead with a U.S.-backed peace plan leading to a Palestinian state by 2005.

Zubeydi said he released the governor because of a call from an unidentified official at Palestinian leader Yasser Arafat's office. Al Aqsa is loosely affiliated with Arafat's Fatah movement.

"For me, Arafat's order is not up for negotiation," Zubeydi told The Associated Press. "So I released him immediately."

The militant leader said he would leave the responsibility for judging the governor to Arafat. "I think he will take the right decision," Zubeydi said.

Zubeydi had said earlier that Palestinian security officials asked on behalf of Arafat for Irsheid's release. Instead, Zubeydi urged Arafat's Palestinian Authority to send a mediator to question the governor and listen to militants' demands. It was unclear why Zubeydi changed his mind.

Palestinian Information Minister Nabil Amr said the kidnapping was "a regrettable situation. "It will be solved, and this type of behavior will not be allowed," he said.

Israel demands the Palestinians disarm militant groups as a condition for progress on the peace plan, but the Palestinian Authority is reluctant to do for fear of triggering further violence.

Al Aqsa has been blamed for several small-scale attacks on Israelis since the main Palestinian militant groups declared the temporary cease-fire on June 29. Although Fatah joined the truce, Al Aqsa is loosely organized and leaders of some branches refused to honor it.

Palestinians complain that random violence is widespread in West Bank towns, where armed militants have gained strong influence during three years of violence, and where Israeli raids and restrictions have forced Palestinian police off the streets.

On Thursday, in an unusual protest against fellow Palestinians, hundreds of people demonstrated in Nablus against violence by armed men after gunmen shot and killed a young mother and a teenager died in an explosion.

Jenin's refugee camp has been a particular stronghold of Palestinian militants. In April 2002, Israeli soldiers backed by tanks, helicopters and bulldozers leveled a football field-sized swath in the center of the camp. An intense eight-day battle in the camp's dark, narrow alleyways left 23 Israeli soldiers and 52 Palestinians dead.

Al Aqsa is mostly known for shoot-and-run attacks against Jewish settlers and Israeli soldiers in the West Bank. Islamic Jihad and Hamas, the other main militant groups, are largely responsible for suicide bombings that have killed hundreds of Israelis.

Israel has battered the Al Aqsa network in the West Bank over the past 33 months with mass arrests and targeted killings.